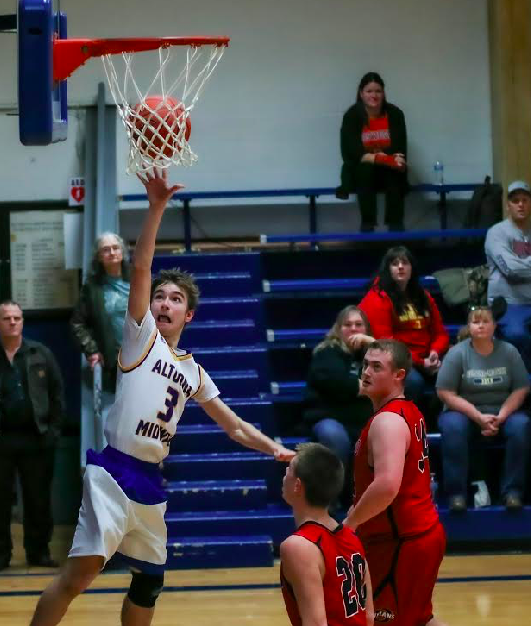 BUFFALO – Revenge factor. Excitement. Lead swings. Tense emotions.          This game didn’t have a little bit of everything … it had a lot of everything.

The Altoona-Midway Jets – less than a week after being thoroughly humiliated by Oswego in a tournament game, bounced back full bore in the rematch here Friday night.

The Jets, led by an amazing 31-point performance by sophomore Jackson Ashmore, pulled out a heart-stopping 68-63 triumph in a thrilling contest before the home fans at Milo Peterson Gymnasium.

The Lady Indians came out on top 54-13 in the girls’ contest, while the AMHS junior varsity boys also picked up an exciting 38-37 win in the night’s opening matchup.

Leading 64-63 with the clock winding down, Caden Carter hit a bucket to put the Jets up by three with just 14.8 seconds remaining. Joshua Meigs stole the ensuing inbounds pass and scored, giving Altoona-Midway the final margin in what had been a see-saw affair up to that point.

“This win tonight is one of the most satisfying games I have ever been a part of,” said a jubilant AMHS head coach Jeff Almond. “After losing to Oswego just six days ago by 33 points … yeah, it felt pretty good.  We were pretty excited in the locker room after the game.  The kids have worked hard and they earned this one.”

Oswego appeared to headed to another easy win early on, as they led 18-9 after one period. But the Jets rallied back to take a 27-26 halftime advantage.

“The kids came out a little tight tonight, and we committed numerous turnovers,” Almond said. “But we settled in and played great defense in the second quarter.

“(Assistant) Coach (Lane) Huffman and I talked to the kids about breaking the last two quarters in to four 4-minute segments. We told the guys that if we are going to win, we have to win three of those four segments,” Almond continued. “They did it. We slipped just a bit at the end of the third quarter but we owned the fourth quarter.”

Jackson Ashmore fired in a career-high 31 points for the Jets, but it was far from a one-man show. Carter finished with 12 points, while Dayton Marsh had 10 points and 11 rebounds and Meigs finished with eight points and eight rebounds.

“Jackson had the best game of his high school career tonight,” Almond noted. “Jack had several turnovers early, but once he gained his composure, the rest of the team followed his lead.  Joshua and Caden rebounded and shot well for us tonight, and Dayton notched a double-double.

“For the second game in a row we shot free throws pretty well, going 20-27 while Oswego was 7 for 18,” Almond continued. “Our free throw shooting was the difference tonight.”

AMHS improved to 5-8 on the season. The Jets are now 3-2 in Three Rivers League play.

The girls’ contest saw Oswego blank the Lady Jets 12-0 in the opening period. It didn’t get much better the rest of the way as OHS led 29-6 at halftime and 44-9 after three periods en route to the 54-13 win.

“We didn’t play well tonight. We couldn’t seem to get out of our own way,” said AMHS girls’ coach Ron Rice. “We made mistakes that we haven’t been making recently such as running into half court traps, not remembering to play help defense when we got tired, and forcing bad passes.

“Even though it wasn’t our best game, I did see some positives,” Rice continued. “Shia Bennett got us some good rebounds and Vonna O’Brien fought for loose balls. Emma Martin scored using a drop step we’ve been working on. Josie Huffman was more aggressive on offense and took some good shots at the basket. My main post players from the beginning of our season, Natalie Davis and Mariah Stackhouse, are making excellent progress as guards and are beginning to see the floor and anticipate passes.”

Davis led the Lady Jets with six points, while O’Brien, Stackhouse and Martin had two points each. Huffman added a free throw.

Oswego was led by Abby Long with 12 points and Allie Vail with nine.

Altoona-Midway hits the road to Moran on Tuesday to face Marmaton Valley.