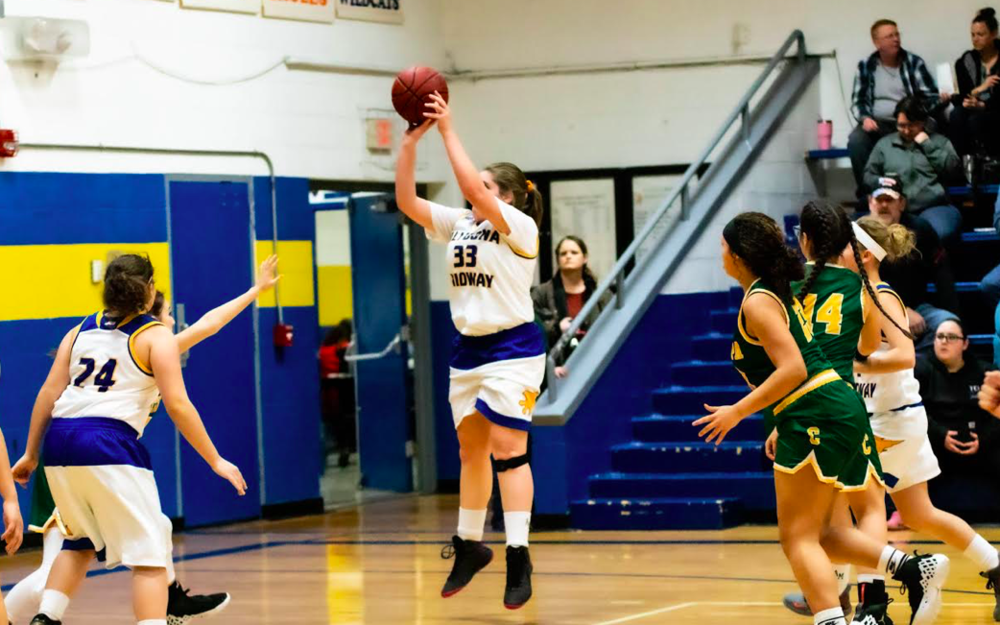 BUFFALO – What a great way to celebrate homecoming.

Altoona-Midway High School crowned its 2020 Homecoming King and Queen between games of the varsity doubleheader here Friday night, and then celebrated that coronation as the Jets rolled to a 63-47 victory over Chetopa before a large, festive crowd at Milo Peterson Gymnasium.

Kylee Wade was chosen as Homecoming Queen and Caden Carter was named Homecoming King during the ceremony between games (see separate story and picture). They reigned over the basketball nightcap as AMHS picked up its second victory of the season.

Prior to the homecoming ceremony, Chetopa’s Lady Green Hornets were victorious over the Lady Jets by a 54-8 margin.

Not only was it homecoming at Altoona-Midway, but it was also the home opener of the season for the Jets, who played their first six games on the road.

It was an interesting matchup where each team dictated the action for about one half of each half. Altoona-Midway stormed to a 16-4 first-quarter lead but then fell behind 26-23 by halftime. The Jets managed to regain a slim three-point margin after three periods, then outscored the Hornets 24-11 in the final eight minutes to win going away.

“The kids started strong and finished strong,” said AMHS coach Jeff Almond. “But the second and third quarters were hard to watch. We were getting pushed around under the basket and gave up (several) easy baskets off of offensive rebounds.

“We struggled to put the ball in the basket for much of the game. We missed numerous ‘chip shots,’” Almond noted. “But I was extremely pleased with the way we finished.  We hunkered down, played tough defense, and created numerous turnovers. The kids were finally able to get the ball in the hoop and turned a very tight game into a double-digit win.

Sophomore Jackson Ashmore finished the night with 21 points to lead all scorers, while Caden Carter and Dayton Marsh fired in 12 and 10 points, respectively. The Jets also enjoyed a 26-20 rebounding advantage.

Wright paced the Chetopa attack with 15 points while Scott added nine for the Hornets.

“The crowd was amazing tonight,” Almond noted. “Not only was it homecoming, but this was our first home game of the season and it was great to get the support of the A-M fans.”

The AMHS junior varsity made it a sweep on the boys’ side of the ledger with a 26-21 win in the night’s first contest.

The Altoona-Midway varsity boys are now 2-5 on the season.

In the opening contest, the Lady Green Hornets used a huge size advantage to breeze to the easy 54-8 victory. Chetopa, utilizing several of the same girls who led the school to its first-ever berth in the state volleyball tournament last fall, led by a whopping 20-2 margin after just one period of play, and the advantage continued to grow for the remainder of the game.

“Tonight was a night when size kills,” said AMHS girls’ coach Ron Rice. “Chetopa was able to use their height to their advantage on both offense and defense. Even when we were in the right spot on defense, Blundell and Conard were still able to shoot over us.”

The one-two punch of Brali Conard and Samantha Blundell accounted for 16 and 15 points, respectively, for the Lady Hornets.

“In the first half, we struggled with running our sets and playing on the fly when the plays broke down. We did a better job of being more aggressive and played a better second half,” Rice noted. “In the second half we showed more hustle and limited their transition baskets. We also played smarter with the ball and had less turnovers. We’ll keep working on our fundamentals and get ready for next week.”

Mariah Stackhouse accounted for six of the eight points for Altoona-Midway, while Bailey Graham added a basket for the Lady Jets, who fell to 0-7.

AMHS will remain at home for a pair of games this week. The Jets will square off against a very tough Southeast High School team on Tuesday at Milo Peterson Gymnasium, and then host Crest High School on Friday, Jan. 17, to complete the three-game home stand.