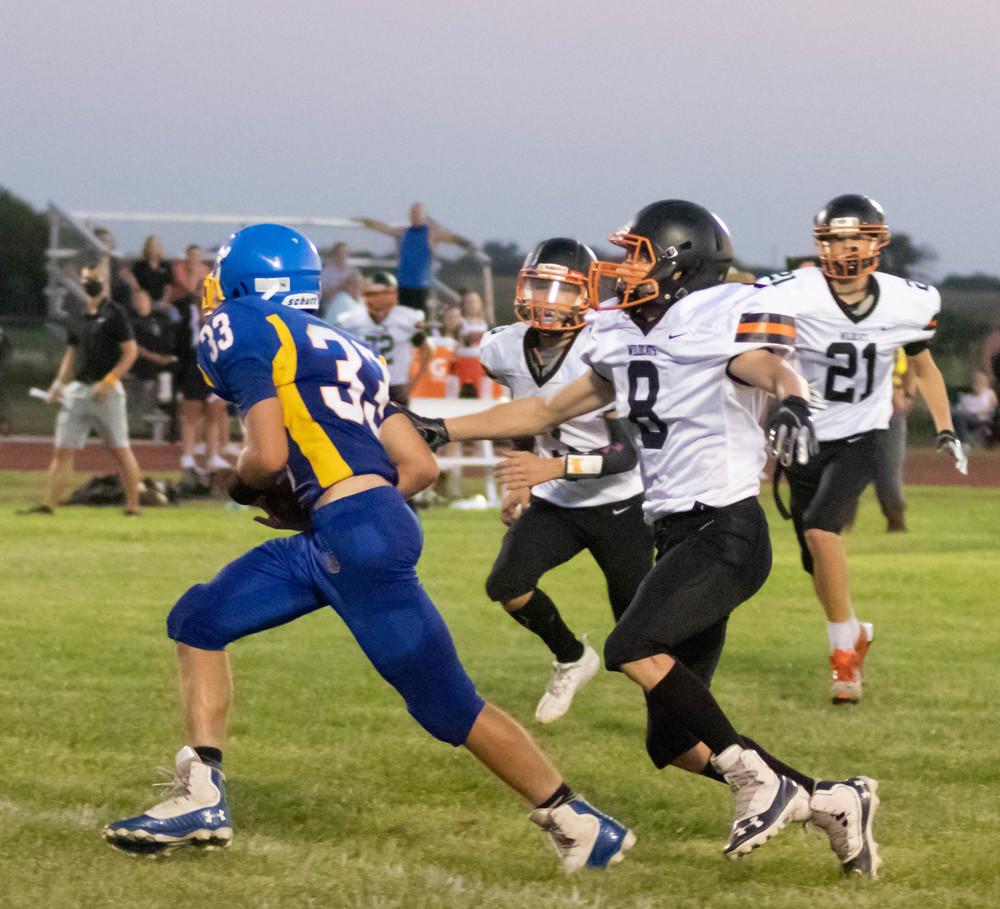 BUFFALO – In sports, the difference between winning and losing is often that
“little something extra.”
For the Altoona-Midway High School football team in its 2020 season opener here
Friday night, that “something extra” was extra points.
Led by an outstanding performance from senior captain Josh Meigs, Altoona-
Midway crossed the goal line eight times in its season-debut – the same number compiled
by their opponent, the Marmaton Valley Wildcats.
However, the Jets converted just two of their PATS, while the Wildcats made good
on six conversions. The result was a 62-52 victory for Marmaton Valley.
Meigs scored six of the eight AMHS touchdowns, three of those coming on rushing
plays as he picked up 208 yards on 18 carries. Meigs also scored on a 65-yard fumble
recovery, a 60-yard kickoff return, and a 40-yard TD pass from Brandon Johnson. Meigs
also accounted for both of the Jets’ successful conversions.
“Josh had a great game. That is exactly what you expect and want out of your senior
captain,” said AMHS head coach Chad Raida. “We lose this game by 10 points and we left
12 points off the board just on failure to complete the extra points. We also had a big TD
run by Josh get called back by a holding penalty. Add those in and the Jets are 1-0.”
Altoona-Midway led 12-8 after the first period, and 30-24 midway in the second
period. But the Wildcats converted on all four of their PATs in the first half and bounced
back to lead 32-30 at halftime. Marmaton Valley then scored the first three TDs of the
third period to extend its lead to 56-30 and eventually claimed the 10-point victory.
In addition to Meigs’ big night, the Jets got a nice showing from Johnson, their
sophomore quarterback, who finished the night 5-of-9 passing for 132 yards and a TD, and
also picked up a loose ball and rambled 52 yards to pay dirt.
Meigs also led the Jet defense with 18 tackles, eight of them unassisted. Johnson
also had 11 tackles. Other than Meigs and fellow senior Josh Capps, the AMHS squad is
made up entirely of freshmen and sophomores.

“No excuses, we have to learn to tackle and the young kids have to catch on quick,”
Raida said. “But I’m very proud of the heart we showed. We never quit.”
Altoona-Midway, now 0-1 in the eight-man pool of the Three Rivers League,
remains at home next Friday to host Yates Center. It will be Homecoming for the Jets.