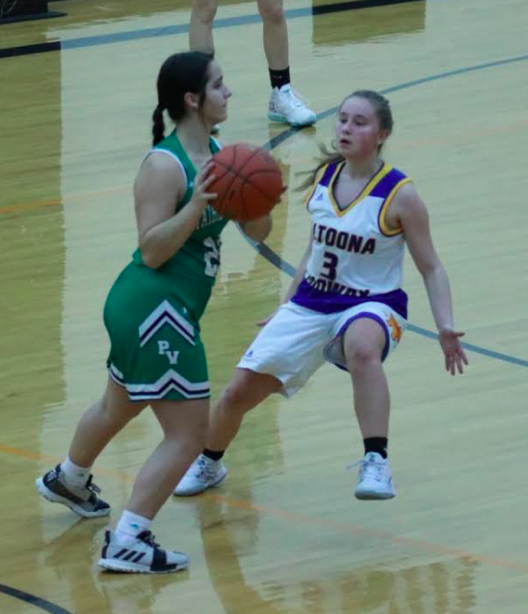 UNIONTOWN – It was a rough beginning to tournament week for Altoona-Midway High School as both Class 1A varsity basketball teams lost to 3A Prairie View High School in first-round action of the Uniontown Midseason Tournament here Tuesday.

The AMHS boys fell 67-42 in an opening round matchup with the Buffalos, while the Lady Jets succumbed to Prairie View by a 46-38 count.

Prairie View canned its first three attempts from behind the arc to go up 9-0 and Altoona-Midway was never able to threaten in the contest.

The Buffalos hit five treys in the opening quarter to build a 19-9 advantage. PVHS led 35-17 at halftime and 52-29 after three quarters.

“We failed to match the hot three-point shooting of Prairie View. They made 8-of-9 from deep in the first half,” said AMHS head coach Lane Huffman.  “We shot 4-14 (from three) for 28 percent. The guys struggled to make free throws as well, going only 4-for-12.”

Still, Huffman came away feeling good about his team.

“Despite the loss, I am excited with the patience in which we ran our offense,” Huffman noted. “Jackson Ashmore played a true point guard role and it gave us some great opportunities to score. He had a good balance of passing and getting himself some shots.

“I am most proud of the way the team never quit,” Huffman added. “We were down 20, yet our energy in our defense was pretty great. We didn’t give up despite being down. Our guys gave everything they had.”

Senior Josh Meigs again led the Jets in scoring with 18 points, while Ashmore finished with nine. Freshman Jacob Meigs came off the bench and contributed six points, while Dalton Smith and Andy Tiger finished with five and four points, respectively.

“We finished around the bucket much better, but left to many points out there with unforced turnovers and missed free throws,” Huffman said.

Altoona-Midway dropped to 3-6 overall, and will resume action Thursday in the consolation bracket of the tournament.

The Lady Jets were only four points down at halftime, but could never quite get over the hump against their larger Prairie View counterparts.

PVHS led 16-10 after one period and 25-21 at halftime. The Lady Buffalos went up by eight entering the final period, but Altoona-Midway could get no closer than the final score the rest of the way, as fouls took a toll on the short AMHS bench, forcing them to play much of the final period with just four players.

“The girls continue to battle,” said Lady Jets head coach Randy Almond. “We were going up against a 3A school, and we never quit, despite having to play most of the fourth quarter with just four girls.

“I’m very proud of these girls. They played with a lot of heart,” Almond added.

Natalie Davis had an impressive performance for the Lady Jets, leading all scorers with 17 points and hauling down 18 rebounds.

Abby Kirkpatrick led the Lady Buffalos with 12 points. Addison Bloodgood was next with seven while Allison Loomis and Braxton Steinbrook chipped in six apiece.

“We had a lot of difficulty with the press, and Prairie View’s pressure defense,” Almond noted. “Turnovers again took a toll on us. But we kept fighting. The girls continue to improve.”

The AMHS girls are now 0-5 on the season.