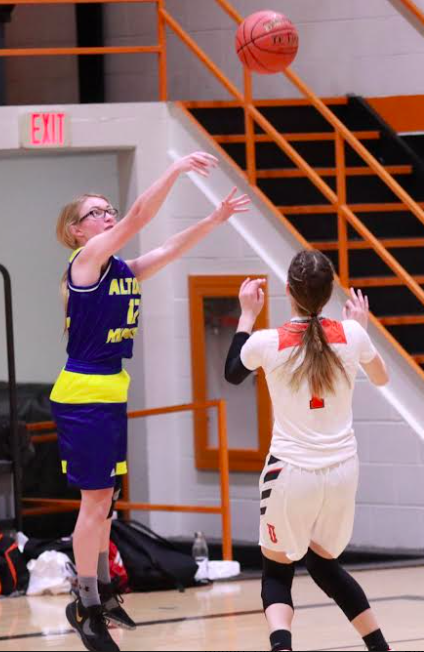 UNIONTOWN – Less than a week ago, Uniontown High School invaded Altoona-Midway’s home court and left with a pair of lopsided victories. Six days later, both squads held a rematch in the second round of the Uniontown Midseason Tournament.

Not much changed in a week, as both talented Uniontown teams posted convincing victories over AMHS here Thursday.

Uniontown was victorious 59-42 in the boys’ contest, while the Lady Eagles defeated Altoona-Midway 59-27.

Both AMHS squads will finish tourney action on Saturday.

Uniontown’s fast-paced tempo at both ends of the floor proved difficult for the Jets in the 59-42 loss.

“Turnovers were an issue again tonight,” noted AMHS head coach Lane Huffman. “We turned the ball over close to 20 times. It’s tough to win games when we don’t get shots up.

“We struggled from the field again, only shooting 29 percent. But we also struggled at the free throw line,” Huffman said. “We missed 10 free throws tonight. Making those keeps us in the game.”

“Late in the game, we turned up our intensity defensively and made a small run. We ended the game with seven steals. It was just a little too late,” Huffman added. “All 10 players on the roster got minutes tonight. We know it’s going to take everyone playing their best to start winning games.”

Lady Jets head coach Randy Almond wants his team to play aggressive defense, but he also needs them to stay out of foul trouble due to his short bench. He is pleased with his girls’ efforts, although they have not yet been able to find a happy medium.

“We had a better night in the foul category, as no one was in foul trouble. The girls moved their feet on defense instead of reaching,” Almond noted. “However, the down side was we didn't play as aggressively as the previous game.

“We still have a lot to work on, but the girls always play with a lot of heart,” he added. “I continue to be very proud of the girls, but tonight we did not play with the same level of intensity that we need.”

Uniontown stormed out to an 18-2 lead and the game was never in question. The Lady Eagles led 35-14 at halftime and 51-25 after three.

AMHS senior Natalie Davis had a solid night with 13 points and five rebounds. Mariah Stackhouse was limited in playing time due to an injury, but finished with seven points, while freshman Summer Raymond also tallied seven.

Uniontown enjoyed a three-pronged attack led by Karleigh Schoenberger with 18 points, Danielle Howard with 16, and Sammie Hampton with 13.

The AMHS girls are now 0-6 on the season.