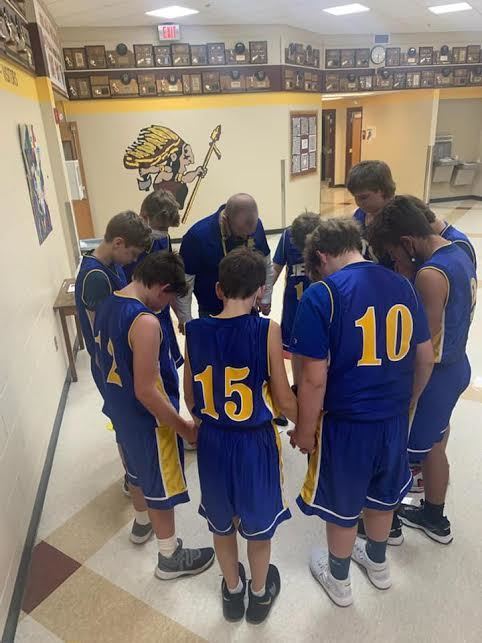 ST. PAUL – Playing with heavy hearts for their coach and his daughter, the
Altoona-Midway Middle School boys’ basketball team was on a mission here Thursday
evening.
The Altoona-Midway community has been in shock this week after Jessica Almond,
daughter of Jets’ athletic director and middle school coach Jeff Almond, unexpectedly
passed away.
The young AMMS cagers dedicated Thursday’s game against St. Paul to their coach
and his daughter Jessica, then went out and played four quarters of inspired basketball and
came away with a 2822 victory over the Indians.
“Do I have a great bunch of kids or what? I couldn’t be prouder right now,” said
Almond upon hearing of the dedication, which included a pre-game prayer and the players
breaking each team huddle by saying “Jessica.”
In the girls’ contest to open the evening, St. Paul had little trouble as they waltzed to
a 44-6 victory over the Lady Jets.
AMMS Boys
Opening Mineral Belt League play on the road, picked up its first victory of the
young season, coming away with a 28-22 victory over the Indians here Thursday evening.
The Jets, winless in their first three non-league contests despite coming close in two
of those games, finally got over the hump and earned their first win of the year.
AMMS led 14-9 at halftime and 19-14 after three periods. The Jets held an
impressive 28-17 advantage with two minutes left and withstood a rally by the Indians,
who scored the final five points of the game.
Filling in on the bench for Coach Almond were AMMS principal Darrin Ashmore
and Lady Jets’ head coach Michelle Morales.
Altoona-Midway is now 1-3 overall, but 1-0 in league play.
AMMS Girls

St. Paul had their way in the opening contest, steamrolling to a 44-6 victory. The
Lady Indians led 28-2 at halftime and 32-6 after three periods.
The Lady Jets are now 0-3 overall, 0-1 in Mineral Belt League play.