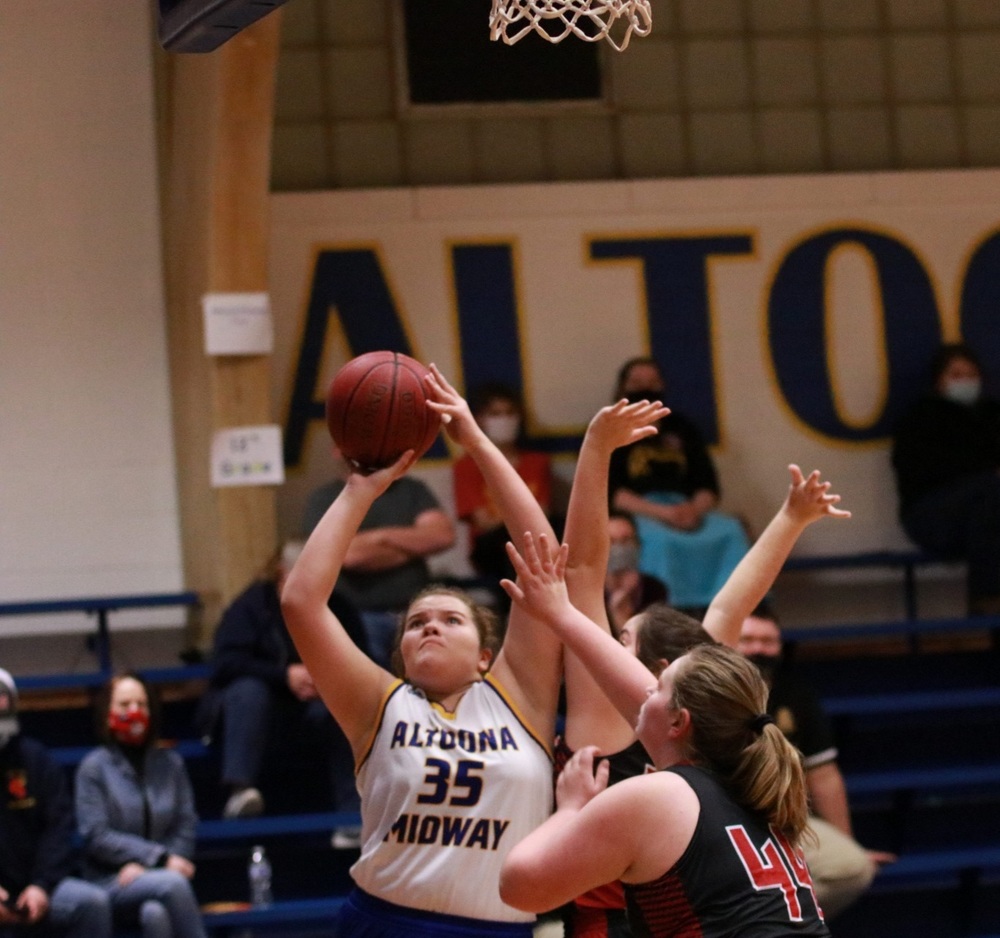 The AMHS squads were both forced to battle major foul problems as well as their opponents from Flinthills High School, and as a result dropped both ends of the non-conference doubleheader played at Milo Peterson Gymnasium.

Flinthills won the boys’ game in a thriller, 71-68, while the Lady Mustangs galloped to a 56-25 victory.

Trailing by 6-8 points most of the fourth quarter, the Jets almost rallied to pull victory out of the fire.

Senior Josh Meigs hit back-to-back buckets 20 seconds apart to pull AMHS within 70-68 with just under a minute remaining. The Jets had two more possessions, sandwiched around a Mustang free throw, but could not connect on either one and fell by the final three-point margin.

“Our pressure defense caused a lot of turnovers in the first two periods, but we failed to keep the intensity up in the second half,” noted AMHS head coach Lane Huffman.

Altoona-Midway controlled the first half of the contest, building a 13-point cushion at 33-20 with about three minutes left in the second quarter, before the Mustangs rallied to get within 39-34 at intermission.

Flinthills then outscored AMHS 23-12 in the third period to grab a 57-51 advantage.

“Once again we struggled with foul trouble,” Huffman noted, pointing out two Jets were disqualified by fouls and three others finished the game with four fouls apiece. At one point in the first half, the Jets had three freshmen on the floor at the same time.

But despite the foul trouble, the Jets’ biggest problem was Flinthills post man Hunter Lowmaster, who dominated in the paint and rattled the nets for 39 points before fouling out with three minutes left.

“We struggled to box out the entire game,” Huffman lamented. “Flinthills got way too many second chances.”

Altoona-Midway’s leading scorer also had to sit down early. Jackson Ashmore tallied a team-high 24 points before fouling out with two minutes remaining. Meigs also poured in 23 for the Jets.

The Jets (1-3) were able to add a game to their schedule this Friday. AMHS will host Tyro Christian (boys games only). Action will begin at 5 p.m.

Foul-trouble was also the theme of the early game, as the already-shorthanded Lady Jets were forced to finish the last quarter-plus of the contest with just four players on the court.

AMHS only had six girls suited up for the game, and Mariah Stackhouse and Kadence Lamendola were both disqualified by fouls in the third period.

“We had foul trouble all night,” noted Lady Jets head coach Randy Almond. “Summer (Raymond) and Mariah both had four fouls by halftime and Kadence had three. Then we lost for Mariah and Kadence in the third period.

“But the girls played with a lot of heart, especially having to finish the game with four players on the court. I’m proud of them,” Almond added. “The girls are continuing to improve.”

“I was very proud of Natalie for her senior leadership,” Almond added.

Flinthills led 18-2 at the quarter, 39-11 at halftime, and 50-19 after three periods. The Lady Mustangs were paced by Riggin Carney, who poured in 21 points.

The Lady Jets (0-2) have completed the pre-Christmas portion of their schedule. They will resume play Jan. 5, hosting Chetopa.