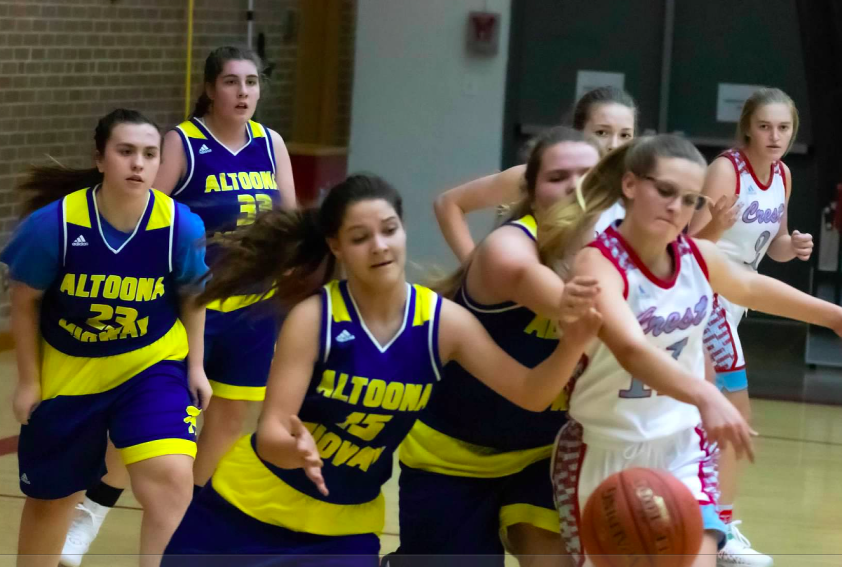 COLONY – Crest High School was able to come away with victories in both varsity contests with Altoona-Midway here Friday night as basketball returned after the Christmas break for schools throughout the state of Kansas.

Crest notched a 60-47 triumph over the AMHS in the boys’ Three Rivers League contest, while the Lady Jets put up a good fight before falling to the Crest girls 40-34.

The Jets were in game all the way until running out of steam late in the contest. AMHS fell behind 8-1 to start the game, but bounced back and took a 12-11 lead early in the second period. Crest led 29-24 at halftime, and Altoona-Midway was within 40-36 entering the final period.

The Jets got within 42-40 but were outscored 18-7 the rest of the way. In the closing minutes, there was a short delay due to an injury to a Crest player. The Lancers pulled away following that stoppage of play.

“After the delay, the players for Crest returned to the court ready to play. We failed to match their energy,” said AMHS head coach Lane Huffman.

Josh Meigs, who sat out the final game before Christmas due to an injury, rattled the nets for 21 points and hauled down eight rebounds in the losing effort.

“Josh is one of the top scorers in Kansas (averaging 20.8 ppg in five games),” noted Huffman. “Plus, he does all of the little things. Josh is a player any coach would love to have, and I’m happy to have him leading this team.”

“Our man defense was operating extremely well for a majority of the game,” Huffman added. “We rebounded well in the first half, keeping the game close.”

The Lady Jets put up an impressive battle attempting to pull out their first win, but Crest senior Aubrey Holloran had other ideas.

Holloran was a one-woman wrecking crew for the Lady Lancers, as she poured in 28 of her team’s 40-point total, leading Crest to the narrow 40-34 win.

The Lady Jets held the led twice – the opening basket of the game by Mariah Stackhouse, and a fast-break basket by freshman Summer Raymond, which gave AMHS a 16-15 lead.

Tied at 17, Crest responded with five unanswered points in the final seconds of the period to lead 22-17 at half.

The Lady Jets stayed within striking distance the rest of the way, trailing just 36-34 with under two minutes to play, but could never again gain the lead.

Other than Holloran, no Lady Lancer scored more than four points.

The loss dropped the Lady Jets to 0-3 on the season and 0-1 in league play.          Altoona-Midway squads will be back in action Tuesday when they travel to Oswego.