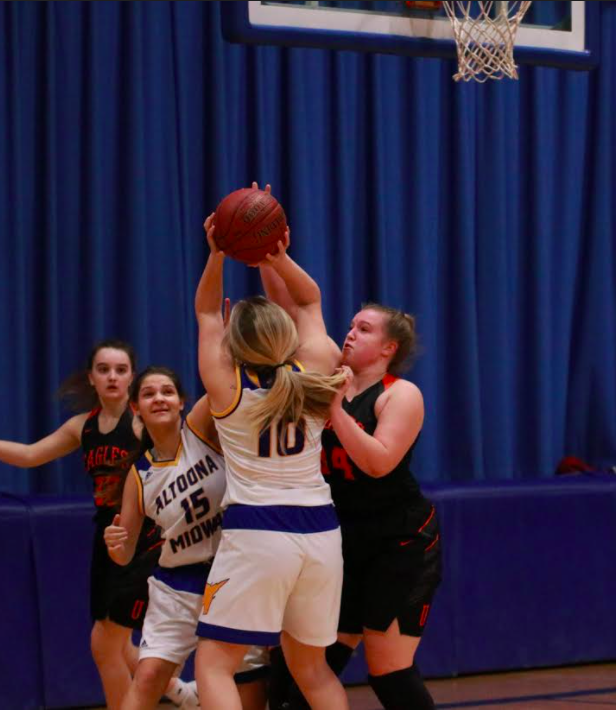 AM falls to Uniontown

Basketball teams from Uniontown High School flew into Milo Peterson Gymnasium and left with a pair of impressive victories over Altoona-Midway High School.

In the opening game, the Lady Eagles breezed to a 63-29 win over the AMHS girls. Uniontown boys followed suit in the nightcap, securing a 58-30 victory over the Jets and a sweep of the Three Rivers League twinbill.

When a team turns the ball over 20 times, the chances of winning are greatly diminished. Altoona-Midway found that out first hand here Friday.

“We turned the ball over 20 times. When you do that, you’re giving away too many chances to score,” said AMHS head coach Lane Huffman. “Throughout the first three quarters we struggled to capitalize on good offense. When we took care of the ball, we ran our offense well enough to get layups and open 3’s, but failed to convert. It was a rough night.”

Uniontown controlled the game from the outset, going up 19-9 after one period, 35‑18 at halftime, and 52-23 after three quarters.

Josh Meigs again led the Jets in scoring, dropping in 21 points to go along with four rebounds and three steals.

Andy Tiger continues to show improvement and led the Jets with seven rebounds, while senior Alex Troutman pulled down five.

Uniontown was led in scoring by Jake Harvey and Clayton Sutterby, who tossed in 18 and 14 points, respectively.

Altoona-Midway dropped to 3-5 overall and 1-2 in TRL play.

The Lady Eagles stormed to a 22-6 first-quarter advantage and were never threatened in the girls’ contest. Uniontown led 36-17 at halftime and 51-24 after three quarters, coasting to the 63-29 win.

Yet the AMHS coaching staff, realizing heading into the game they were faced with a very tough opponent, found some bright spots on the night.

“Our girls came out positive tonight. They battled well and played hard,” said AMHS assistant coach Lea Chickadonz. “It is good to see the team gaining confidence in themselves.”

As usual, the Lady Jets offense was led by the one-two punch of Natalie Davis and Mariah Stackhouse. Davis took team-scoring honors with 11 points, while Stackhouse was right behind her with 10.

Uniontown was led by Danielle Howard, who scorched the nets for 23 points, while Karleigh Schoenberger also had a fine game, finishing with 16.

Altoona-Midway will participate in the Uniontown Midseason Tournament this week.