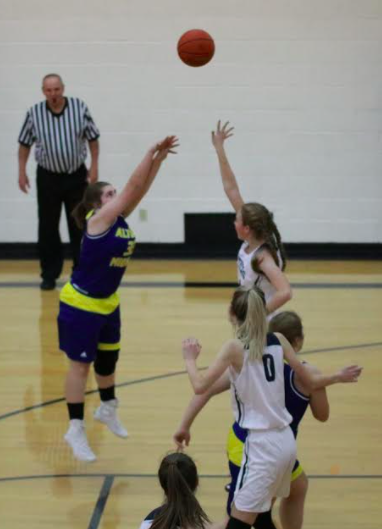 UNIONTOWN – Altoona-Midway High School wrapped up play in the Uniontown
Midseason Tournament here Friday, with both the boys’ and girls’ squads dropping
contests against Kansas City Christian High School.
KC Christian picked up its a 66-42 victory in the boys’ matchup, while the Lady Jets
dropped a 47-18 decision.
Both AMHS teams will return to action Tuesday when they host Southeast High
School at Milo Peterson Gymnasium.
AMHS Boys
KC Christian finished unbeaten in the Kenny Holt Memorial Tournament, claiming
the trophy with a perfect 3-0 mark for the week. Uniontown topped Prairie View to claim
second place.
The Jets played a good first quarter despite being down 20-12, but failed to handle
KCC’s pressure defense and fell behind 37-18 at the break.
“After two losses I really felt our guys were focused pregame,” said AMHS head
coach Lane Huffman. “We came out battling, playing tough defense. We stayed in front of
our guy and had our hands up. But in the second quarter we failed to handle the full court
trap KCC was using. We had 14 turnovers by halftime.
We didn’t take care of the ball in third quarter either,” he added. “In the fourth we
played pretty even with KCC. Our defense was better and we also eliminated the turnover
issue.”
Josh Meigs and Jackson Ashmore once again led the Jets offensively with 14 and 13
points, respectively. Jacob Meigs and Andy Tiger scored four points apiece, Dalton Smith
had three and Alex Troutman and Zeek Roby scored two each.
“Our theme this week was waiting too late to turn up the intensity and effort on full
blast,” Huffman said. “Moving into league play, we have to focus on being consistent and
having all five players doing their job.”

Altoona-Midway now stands at 3-8 on the season.
AMHS Girls
The Lady Jets suffered through their lowest offensive output of the season in their
47-18 loss to KCC.
The Lady Panthers finished second in the tournament, losing only to Uniontown.
“The girls played with a lot of heart but could not overcome the height of KC
Christian,” noted Lady Jets coach Randy Almond.
The Lady Panthers led 14-1 at the quarter, 25-5 at halftime, and 43-12 after three
periods.
Mariah Stackhouse tallied a dozen of the point total for the Lady Jets, while Natalie
Davis scored five and Kandence Lamendola added a free throw.
“Mariah played through the pain of a knee injury but still had 12 points and five
rebounds,” Almond noted. “Natalie also had a good game with five points and six
rebounds.”
Almond also mentioned the rebounding of Kyra O’Connor, the hustle of Summer
Raymond and Ava Hufford, adding, “Alyssa Relph and Emma Martin also contributed
with some good minutes off the bench.”
KCC Christian had three players score in double figures; Van Elders 17, Veer 14,
and Spencer 10. Van Elders and Spencer were named to the all-tournament team.
“We will just have to put this game behind us, learn from our mistakes, improve and
focus on the positive as we move on to next week's opponents,” Almond said.
The Lady Jets, 0-7, will attempt to break into the win column Tuesday against
Southeast.