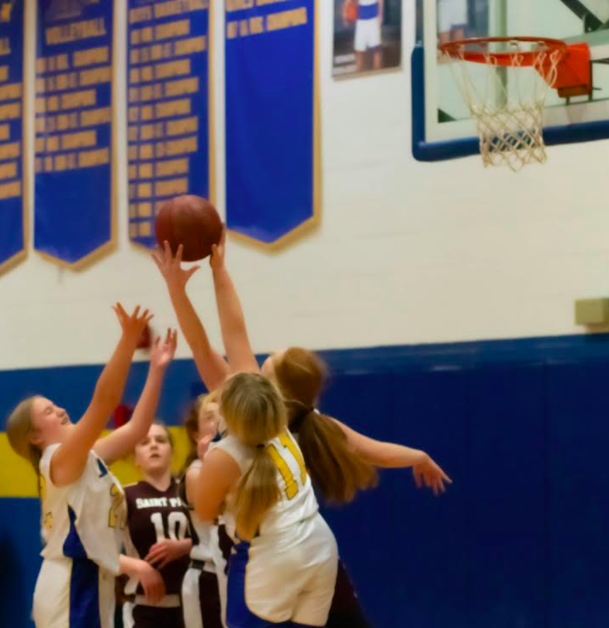 The Lady Indians secured the top-seed in the Mineral Belt League Tournament that begins play later this week by virtue of their convincing 49-16 victory of the AMMS girls in the opening contest.

In the boys’ game, Altoona-Midway solidified its claim to the No.2 seed in their bracket, squeezing out a 32-28 comeback win over St. Paul, forcing the Indians into the play-in game of the boys’ bracket between the fourth- and fifth-place seeds.

A team that gets shut out offensively for an entire quarter will usually not wind up in the winner’s circle. But the Jets defied those odds Monday, overcoming a nine-point halftime deficit in the process.

Altoona-Midway recorded a goose egg in the second quarter and trailed 17-8 at halftime. But the Jets rallied with a 15-3 third period to go up 23-20, then held on for the 32-28 victory.

“Tonight was a tough game for us,” admitted AMMS head coach Jeff Almond. “We missed at least 15 point-blank shots.  You're not going to win too many ball games when that happens.  We got lucky tonight.

“But give St. Paul a lot of credit.  They played hard and their defense was good tonight.

“Yeah, we had a pretty terrible second quarter, but we talked at halftime, made an adjustment and came out and had a good start to the second half,” Almond noted. “As a coach, it is good to know that you can persevere in the face of adversity.”

St. Paul showed why they are the top-seed heading into the girls’ tournament, jumping to an early double-digit lead and then increasing it from start to finish.

“We started out slow again tonight and couldn't get back in the game,” noted Lady Jets head coach Michelle Morales. “The girls were simply not playing to win tonight and sadly it showed.

“But I know they are capable of a much better performance then they put on tonight and we hope to prove that in our first game of the tournament this Thursday.”

As she has done all year, Emmalynn Pupanek led the AMMS girls in scoring, firing in 13 points in the losing cause. Pupanek also grabbed 13 rebounds.

“Emmalynn again showed up for the team tonight,” Morales said. “I’m proud of her for stepping up this season and being a good leader, captain and teammate.”

Lexyn Bracken scored three points and Chantal Morales added two to round out the scoring for the Lady Jets. Bracken and Autumn Raymond each recorded three rebounds, while Lexi Foundrey had two steals.