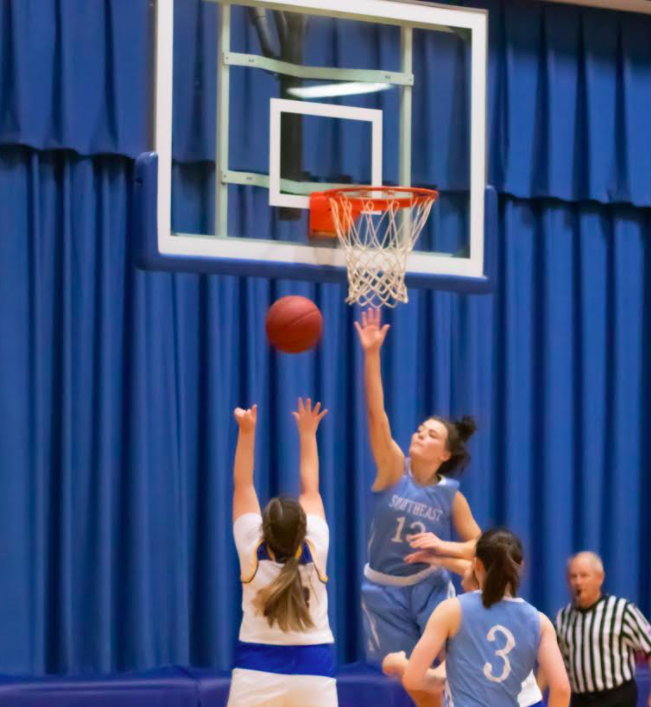 BUFFALO – When your team scores 20 points in the opening quarter of a high school basketball game, the chances of a victory would appear promising, right?

Most of the time. But not when the opponent has already put 27 on the scoreboard.

That was the case for the Altoona-Midway boys here Tuesday night, as Southeast High School rang up 50 points in the first half alone and rolled to a 79-48 victory at Milo Peterson Gymnasium.

In the first game, the Lady Lancers opened the Tri Valley League doubleheader with a 51-30 triumph over the AMHS girls.

“We had a really good first quarter scoring the ball,” said AMHS head coach Lane Huffman. “We were being patient on offense, we had a balanced attack hitting outside shots and scoring inside.

“But in the second quarter we got too loose with the ball which equaled us turning it over too many times,” Huffman noted. “The turnover bug followed us into the third quarter. We didn't give ourselves a chance to score very well, and Southeast took advantage.”

The Lancers led 50-36 at halftime and 73-43 after three, leading to a running clock in the final period.

Josh Meigs led the Jets with 21 points, while Jackson Ashmore added 11, including a three-quarters of the court buzzer-beater to close out the third stanza.

“Josh continues to have a great season scoring the ball. He had 17 of our halftime points. He works hard and faces double teams every game we have played this semester,” Huffman said.  “Jackson is stepping in and playing point guard well. He did a good job passing in the half-court offense. He is going to continue to get better and limit his turnovers in the backcourt.”

With the loss, Altoona-Midway dropped to 3-9 overall, and 1-3 in TVL play.

The Lady Jets showed snippets of their growth Tuesday evening, trailing by single digits late into the third period. But it wasn’t enough as Southeast finished with the 51-30 win.

“Turnovers were again the key – we just have to take care of the ball.  We have to learn to be strong with the ball,” said AMHS girls’ head coach Randy Almond.

“But the girls played hard and there were several times down the court where they looked really good,” he added. “However, we are a young team and it is hard to overcome 18 turnovers in the second half alone.”

AMHS trailed just 20-14 at halftime and 34-24 after three before turnovers really took their toll.

“Another area of the game we need to work on are free throws. The team was 35 percent on free throws tonight and 33 percent shooting from the 3-point land,” Almond said.

“Again, we need to learn from our mistakes, stay positive and continue to grow as a team,” Almond added.

Altoona-Midway hits the road on Friday to face Pleasanton in another TVL matchup.