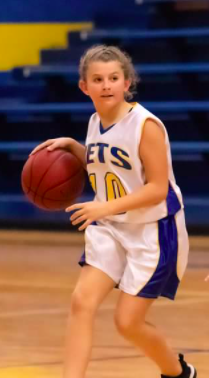 PARSONS – Fans of the Altoona-Midway Middle School Lady Jets probably should start investing in some heart medicine … if it’s not already too late.

For the fourth time in their last six games, the Lady Jets found themselves trailing in the fourth period, only to come storming back – sending one of the games into overtime before falling, and winning three of the contests.

The latest of those come-from-behind thrillers occurred here Thursday evening, as AMMS rallied to edge Chetopa 20-16 in the opening round of the Mineral Belt League postseason tournament.

The victory moves the Lady Jets into the tourney semifinals at 7 p.m. Thursday, Feb. 4, when they will square off against St. Paul (6-1), the regular-season champions.

The other girls’ semifinal was the nightcap Thursday, as No.2 Thayer defeated tournament host and third-seeded St. Patricks 17-12 to earn a berth in the finals.

The Lady Jets trailed Chetopa 12-4 at halftime, and 16-8 with 1:30 left in the third quarter. Baskets by Emmalynn Pupanek and Autumn Raymond narrowed the gap, but AMMS was still down 16-12 entering the final period.

The AMMS girls proceeded to outscore the Lady Hornets 8-0 in the fourth quarter to pull out the 20-16 triumph.

“We definitely had a late start in the game tonight, but after some halftime motivation we came out to win,” said AMMS girls coach Michelle Morales. “I’m proud of the girls tonight for pulling out this win. They deserve it.”

Midway in the final quarter, a free throw by Chantel Morales and baskets by Lexyn Bracken and Pupanek gave the Lady Jets a 17-16 lead. Both teams then went several possessions without scoring.

Morales hit another free throw with 1:07 left to make it 18-16. Fouled with just 18 seconds left, Autumn Raymond missed her charity toss, but promptly grabbed her own rebound and scored on a put-back to ice the victory.

Pupanek led the Lady Jets in scoring with 10 points, but AMMS got important contributions from Morales and Raymond with four points apiece, while Bracken had two points and was credited with several nice passes.          Raymond led Altoona-Midway with 10 rebounds. Pupanek pulled down six caroms and had four steals, while Lexi Foudray pilfered three.

“I wish they would have played to win from the beginning, but we will be going over that in practice tomorrow and next week,” Coach Morales said. “But like I said before, they deserved this win. They all have played hard, not just tonight, but the entire season.”