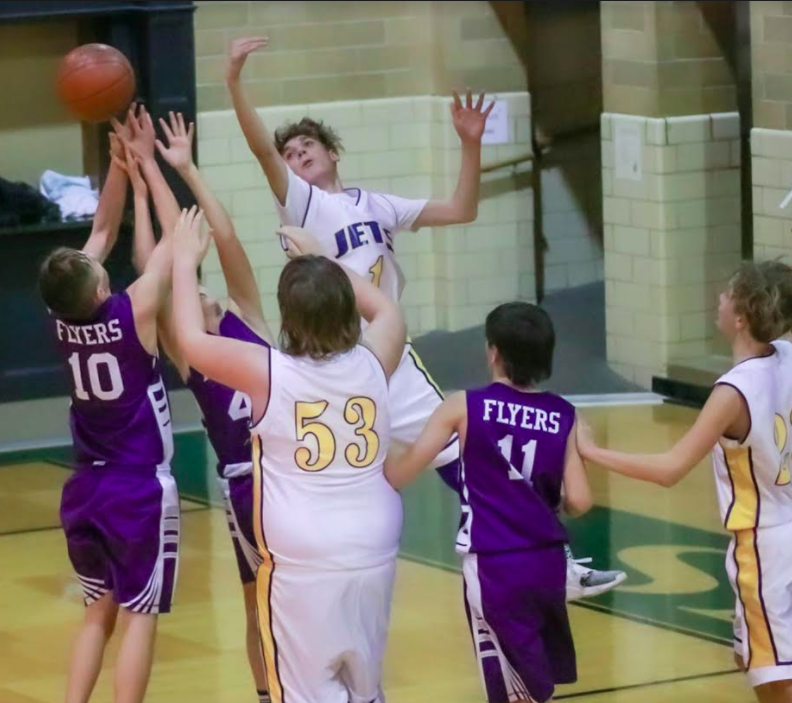 PARSONS – Even the best of sports cars must be tuned up and running on all cylinders or performance will suffer.

The Altoona-Midway Middle School boys’ basketball team found that out the hard way here Monday night, as Kieran Foster and William Stackhouse, the top two sparkplugs for the Jets, both battled foul trouble in their matchup with Thayer in the semifinals of the Mineral Belt League postseason tournament.

The result was a 35-26 upset loss to the Flyers, bringing an abrupt end to an otherwise successful season for the Jets.

In the opening game of the night, St. Paul defeated Chetopa 41-8. St. Paul moves on to face top-seeded St. Patrick’s on Thursday for a spot in the finals next Monday against Thayer.

The girls’ semifinal matchup on Thursday pits Altoona-Midway’s Lady Jets against No.1 seed St. Paul. The winner of that contest moves into the girls’ championship game against Thayer, also slated for Monday, Feb. 8.

Altoona-Midway defeated Thayer in both regular-season matchups, winning 32-20 and 37-34. But the third time was the charm for the Flyers, who used a nine-point run in the third period to turn an 18-17 lead into a 27-17 advantage.

In a classy move, AMMS head coach Jeff Almond declined to even mention the foul trouble to his two leading scorers.

“This was a tough loss for us tonight. Give Thayer credit, they played a great game,” said Almond. “Kieran and Will have been our leaders all season.  They led us again tonight.  William had yet another double-double (his fourth in a row), and Kieran led us in rebounds.”

The Jets got back within five with a couple of minutes remaining but were unable to get any closer.

Stackhouse sat out a good portion of the third quarter, but still finished with 16 points and 11 rebounds. Foster, who had seven points and 12 caroms, fouled out midway in the fourth period, hampering the comeback effort by AMMS.

“Shout out to the eighth graders tonight (Blake Nalley, Kage Beck, Erik Jones, Foster and Stackhouse),” Almond said. “It was great to watch them improve over the season.  I wish them nothing but the best as they move to the next level.  I look forward to seeing them play together over the next four years.

“I also want to thank all the parents and fans for their support this season.  It always helps a team to play better and harder with people cheering them on.  For that, as a team we say, ‘Thank you.’”

Altoona-Midway finishes the season 6-6, but the Jets were 6-2 and runner-up in the MBL during the regular season.