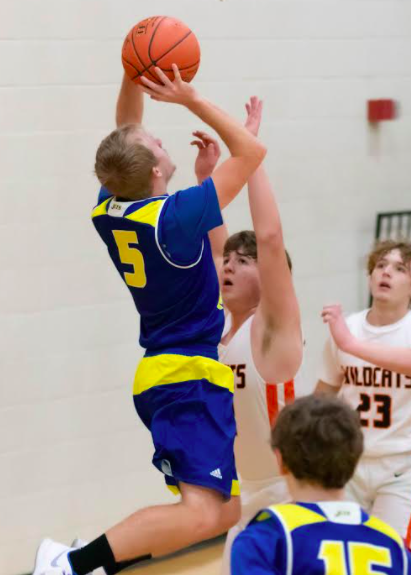 MORAN – If they’re going to play like this, the Altoona-Midway High School Jets wouldn’t mind playing every night for two weeks straight.

Playing for their second consecutive night after a 16-day layoff, the Jets showed no signs of fatigue. On the contrary, AMHS was firing on all cylinders as they rolled to a 69‑12 victory over out-matched Marmaton Valley in a Three Rivers League contest Friday night.

Back-to-back league victories after the long layoff now have Altoona-Midway sporting a 5-9 overall record, and evened their mark at 3-3 in the TRL.

The girls’ game between AMHS and Marmaton Valley was postponed.

“Every member of the (9-man) squad showed up to an optional shoot around before we left for the game,” said AMHS head coach Lane Huffman. “I knew the guys were excited and motivated to stay on a winning streak. This team is ready to get back to work after a long break. You can see they missed being on the court.”

The Jets were perhaps a little sluggish out of the gate playing back-to-back nights, but still led 14-7 at the quarter.

A string of 26 unanswered points to start the second period closed the door on the contest, as Altoona-Midway went up 40-8 at halftime.

“We came to play in that second quarter. Every player saw minutes,” Huffman noted. “We continued to use every player available to play solid defense and patient offense. This was the most effective and balanced we’ve played all year. We had eight of our nine players score tonight.”          Josh Meigs once again led the Jets with 22 points and nine rebounds, while Dalton Smith and Alex Troutman also reached double figures with 10 points apiece.

“Jacob also hauled in seven rebounds to go along with his five points,” Huffman noted. “He’s only a freshman, but he’s turning into a tough young player that is helping us down the stretch.”

Altoona-Midway is scheduled to travel to Yates Center for TRL action on Tuesday, Feb. 16.