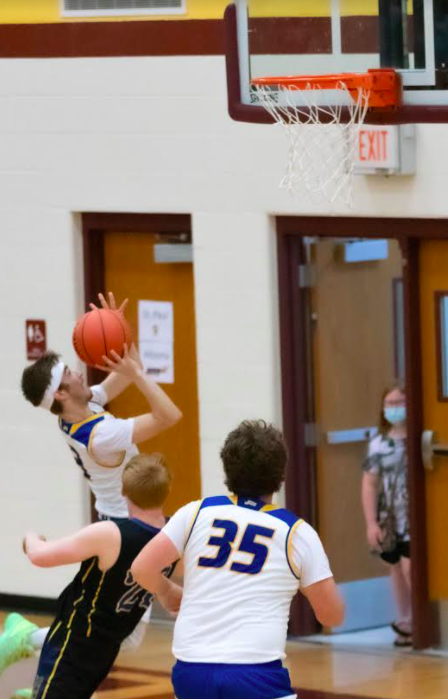 ST. PAUL – Altoona-Midway High School led much of the evening, but saw its season come to an abrupt end as Southern Coffey County rallied in the fourth period to post a 49-42 win in the semifinals of the Class 1A, Division II sub-state here Friday night.

“We did not expect to end our season this soon but the team will keep their heads up,” said AMHS head coach Lane Huffman. “I am extremely happy with the work this team put in. I can promise we will return a solid core of players that are going to work hard this summer. Next year is going to be exciting.”

Southern Coffey County (7-13), was eliminated Saturday night in the sub-state championship game by Waverly, as the Bulldogs posted a 72-41 victory.

Waverly (12-9) advanced to the quarterfinals of the Class 1A, Division II State Tournament.  The Bulldogs are scheduled to take on McPherson-Elyria Christian (14-9) at 6 p.m. Tuesday at the Canton Galva High School gymnasium.

The winner of that game advances to state semifinal action on Friday at Barton Community College in Great Bend.

“We came up a little short, but I am proud of this team. As a first-year head coach, I was nervous if my players would buy in,” Huffman said. “Very quickly into this season I realized I had nine guys that would give me everything they had until the final buzzer.”

Altoona-Midway held a 30-28 lead entering the final period, but Southern Coffey County outscored the Jets 21-12 in the closing eight minutes.

“I was happy with our defense throughout the whole game. We executed our game plan we had practiced all week. However, in the fourth quarter, SCC began to make some very difficult shots and we just couldn't answer back,” Huffman said.

“We struggled to make 3-point shots. SCC sank into a 2-3 zone and took away our inside looks in the second half.”

The Jets led 10-2 after one period and 24-18 at halftime. AMHS enjoyed a 28-18 advantage early in the third period before the Titans started their comeback.

“We came out of the gate focused and played our most efficient basketball of the season,” Huffman noted. “Our patience and ball movement got us easy buckets. Jackson Ashmore did a great job getting the ball inside and we capitalized for much of the first half.”

Huffman pointed out freshman Blaine Collins also made a big contribution even though he did not score.

“Blaine was forced to play a large number of minutes due to foul trouble, and he stepped up to the plate defensively,” the coach noted. “I was proud of his effort, and look forward to working with him and the other underclassmen this summer.”

Huffman had special praise for his two seniors, Josh Meigs and Alex Troutman.

“Josh has given everything he has for the last four years, and that goes for anything he does. His work ethic is going to take him far in life,” Huffman said. “Alex has grown into a respectful teammate and person. He could always lighten the mood and make the team smile. However, he was also focused on the goal ahead.

“This was a special season as I had coached those two in 2014 on a fifth-grade recreation team,” Huffman smiled. “I will hold memories of those two close to me as I continue my coaching career.”

Altoona-Midway ends its season at 6-12.