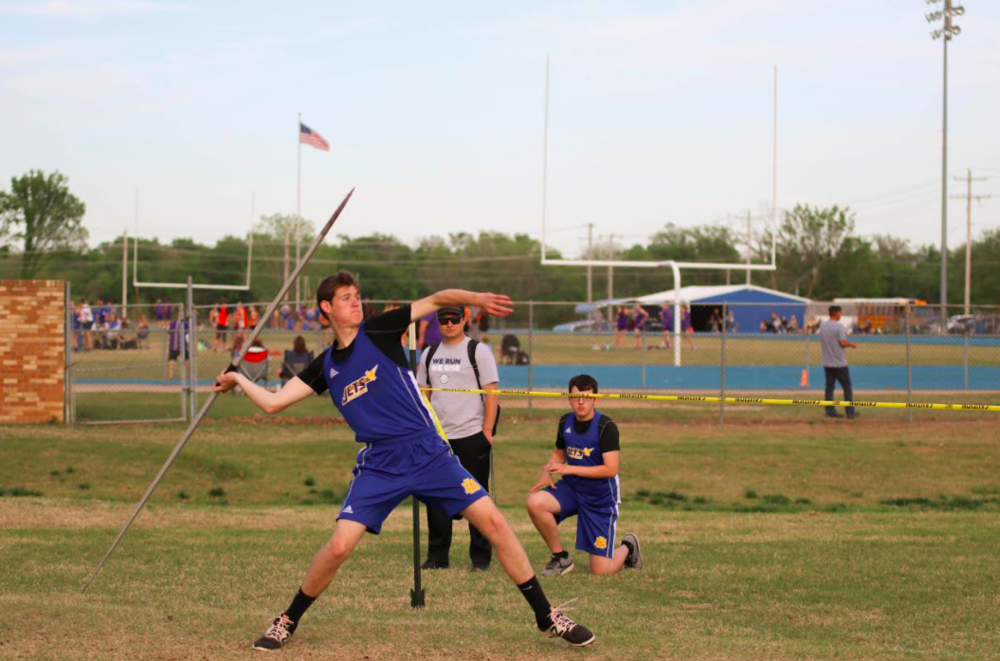 Troutman had a winning throw of 133-9 to take gold in the javelin.

“Alex deserves all the credit in the world for his success in the javelin,” said AMHS track coach Lane Huffman. “As a first-year track coach, I’m still learning all the events. Alex has taken his training into his own hands.

“I see the pride he takes in getting better every day, It’s amazing how far he has thrown already, with minimal coaching and no experience,” Huffman added.

Troutman was also part of the Jets’ quartet also including Jackson Ashmore, Dalton Smith and Josh Meigs that finished fourth in the 4x100 relay with a time of 50.17.

“Those four had never even practiced together in the 4x800,” Huffman noted. “I was very proud of their grit.”

Those results allowed AMHS to compile 16 team points, leaving them in a tie for 11th with Yates Center.

The Lady Jets picked up one point in the team standings. The 4x100 relay took sixth at 59.05 with a unit of Abi Elsesser, Heather Lane, Mariah Stackhouse and Anna Beckwith.

Lane and Beckwith also recorded personal bests in individual events at Thursday’s meet. Lane went 4-4 to take eighth in the high jump, and Beckwith set a PB in the long jump at 12-2.

“I am happy to see several of our athletes reaching new PBs,” Huffman said. “I expect that to continue as everyone is working hard in the weight room. I believe this will also translate into more well-rounded athletes in next year’s sports. I’m excited to continue to work with this group.”

Cherryvale finished atop the boys’ standings with 81 points, while Erie finished second with 72 points. Humboldt totaled 68 points for third.

In the girls’ bracket, Independence racked up 132 points to run away with the team title, more than doubling the 60 points of runner-up Fredonia. Neodesha had 57 points to claim third.