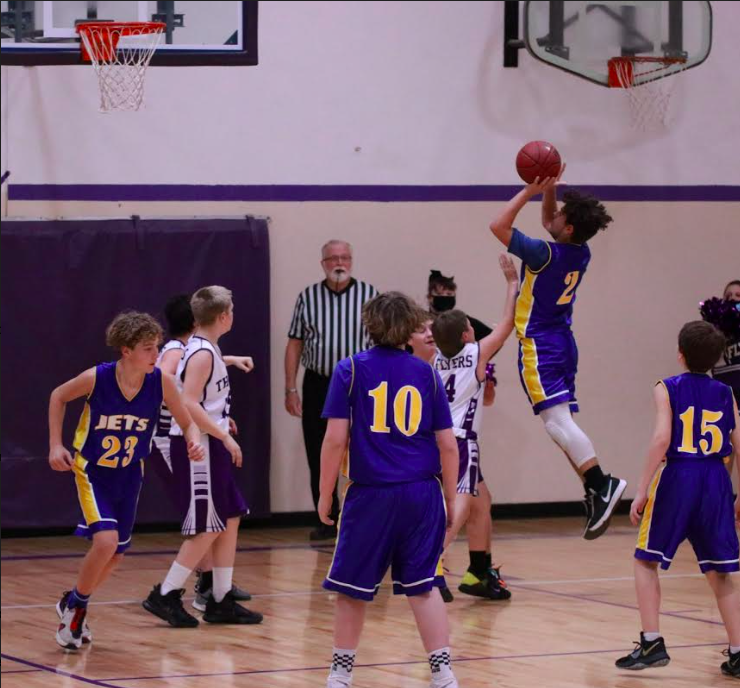 THAYER – After posting a 12-point victory over Thayer Middle School while playing at home earlier this season, the Altoona-Midway Middle School boys found the going much tougher on the road.

But, once again the Jets managed to be the team ahead on the scoreboard when the buzzer sounded. AMMS, winners by a dozen in December in the first matchup, came away with a 37-34 triumph over the Flyers in a Mineral Belt League contest here Thursday evening.

In the first game of the evening, the Thayer girls posted a 35-11 win over the Lady Jets.

Kieran Foster was a major force at both ends of the floor, posting a double-double for the Jets as they squeezed past a feisty Thayer squad.

Foster finished the game with 20 points and 15 rebounds to pace the Jets. William Stackhouse also supplied 11 points and four rebounds. Joey Lamendola had four points and five boards, while Kage Beck rounded out the scoring with a bucket.

“It was nice to get back on the floor (Altoona-Midway had not played since Dec. 14). We definitely came out rusty tonight and really couldn't get it going,” said AMMS coach Jeff Almond.  “Thayer played us tough tonight and deserve a lot of credit.”

The Jets led 22-14 at halftime and 31-24 after three quarters. But Thayer quickly reduced the lead to 32-30 and it was nip-and-tuck down the stretch.

“Although we were pretty sluggish tonight, it is good to know that we can still get it done,” Almond said. “It's a good win for us and we'll definitely take it.  We'll use it as a lesson and move forward and get better.”

The win evens AMMS’ overall record at 4-4. Meanwhile, the Jets now own a 4-1 mark in the MBL play.

In the girls’ contest, Thayer led from start to finish as they posted the impressive 35‑11 victory.

The month-long layoff resulted in a rusty performance by the Lady Jets, who had gone into the Christmas break riding the crest of a two-game winning streak.

“We started slow and we ended slow. We just weren’t moving our feet tonight,” said AMMS girls’ coach Michelle Morales. “We will be working on some new plays and we will be ready to hustle on Monday when we play Chetopa.”

Unofficial stats had Emmalynn Pupanek and Lexyn Bracken leading the way for the Lady Jets with four points apiece. Chantal Morales had two points and Autumn Raymond was credited with a free throw.

Pupanek hauled down four rebounds in the losing effort, while Raymond had two assists.

The AMMS squads return to action Monday, traveling to Chetopa. Tipoff is slated for 5:00.