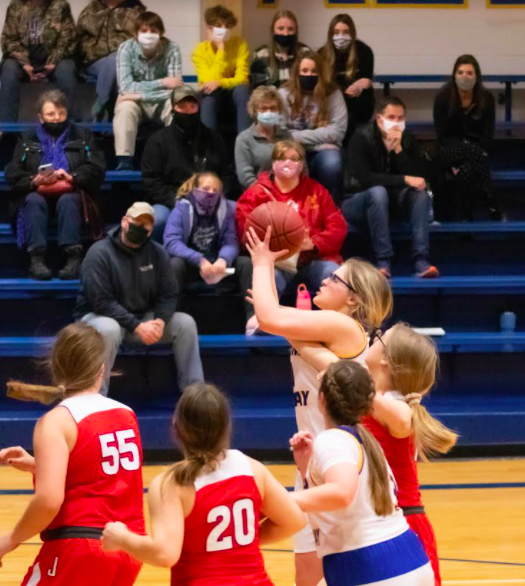 BUFFALO – While the weather warmed up a tiny bit, unfortunately the shooting percentages were still cold for both Altoona-Midway High School basketball teams as they dropped both ends of a Three Rivers League doubleheader with Jayhawk-Linn here Friday night at Milo Peterson Gymnasium.

The Lady Jets, playing for the first time since Jan. 29, couldn’t shake off the rust and were defeated 53-31 in the opening contest. In the nightcap, the AMHS boys saw their two-game winning streak snapped as the Jayhawks took a 64-50 verdict.

However, the losses failed to spoil an otherwise festive evening, as Altoona-Midway hosted both Parents Night and the 2021 Homecoming celebrations.

A horrendous third quarter spelled doom for the Jets. Jayhawk-Linn managed a narrow two-point margin the other three periods, but pulled away with a 20-8 advantage right after halftime.

Jayhawk went on an 11-0 run in the third quarter that we just couldn't battle back from,” said AMHS head coach Lane Huffman. “We did not shoot the ball well tonight, but we were patient on offense. I never felt like we were taking bad shots, we just weren't knocking them down.”

Altoona-Midway, which got 15 from Jackson Ashmore and 14 from Joshua Meigs, trailed only 29-27 at intermission.

“We started the game off well on the defensive end. We forced Jayhawk Linn into some turnovers and tough shots,” Huffman said. “But as the game progressed, we started to give up too many second chance points.”

“Despite a loss, I saw many good things on both sides of the ball. We just have to focus and do those things for 32 minutes,” Huffman said. “I am confident we are figuring things out at the right time in the season.

“Starting next Friday, it's win or go home. I know the team is ready for the challenge ahead after we secured the No.2 seed in our sub-state.”

“We actually played a good solid first quarter defensively,” Almond added, but then it seemed as though the hands came down and the feet went flat.”

The Lady Jets trailed only 6-4 after one period, but Jayhawk-Linn stretched the lead out to 25-11 at halftime, slowly increasing that margin to the 53-31 final.

“Turnovers plagued us again, and the girls got tired and didn’t move their feet on defense. They also got into some foul trouble,” Almond noted. “But we got some good sold performances as well.”

O’Conner and Lamendola each pulled down five rebounds, while Raymond had several assists running the offense. Alyssa Relph did not score but was praised for her defense.

The Class 1A, Division II sub-state pairings have been announced by KSHSAA.

On Thursday, Feb. 25, the Altoona-Midway girls will travel to Waverly for a 7 p.m. tipoff. On Friday, Feb. 26, the AMHS boys will host a first-round sub-state game against Marmaton Valley. That game will also begin at 7 p.m.