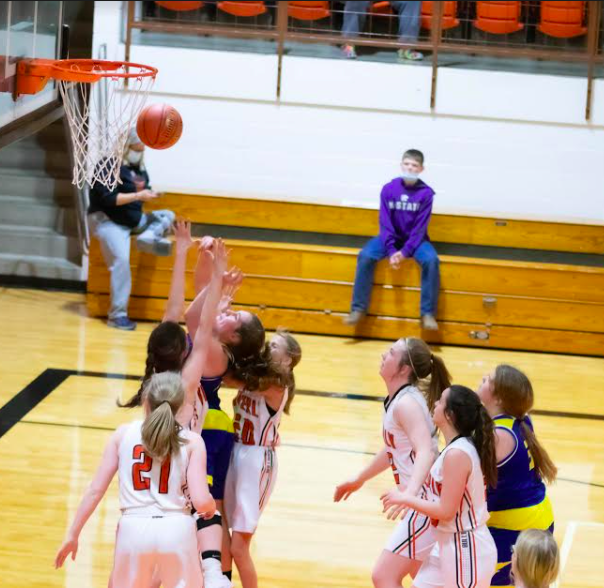 WAVERLY – The Waverly High School Lady Bulldogs, ranked in the latest Class 1A polls, demonstrated their might as they opened postseason play with a 77-12 victory over the Altoona-Midway girls in a Class 1A, Division II sub-state contest played here Thursday.

The Lady Jets finish the season with an 0-13 mark, but neither that record, nor the lopsided finale, tell the entire story of the season, noted AMHS head coach Randy Almond.

“Often it’s the last game that people remember, but I don’t want this final game to define our season,” Almond said. “There is a lot more to this team – and these girls – than that.

“This team got better throughout the season,” Almond continued. “It didn’t translate into wins, but the scores improved from the past few years. We were in several games in the first half, but we were short on numbers and often ran out of steam.

“We don’t have enough girls to practice five-on-five. My ‘manager’ played in every game and even scored,” Almond said. “The girls got stronger on the court. They improved, and they always played hard, and with heart. I am proud of them.”

Waverly stormed out to a 41-2 advantage after just eight minutes of play, and led 62-2 at halftime.

“Waverly was tough. They shot lights out and we couldn’t buy a bucket,” Almond said. “My hat is off to Natalie Davis, our only senior, who played her last game as a Lady Jet and is a true leader on and off the court.”

“Although tonight's season ended rough, we have had some accomplishments this year and should hold our heads up,” Almond noted. “This team grew together and showed a lot of heart as they battled adversities. “With eight girls on the team and only being able to have all eight play in just three games was exhausting, but this team never gave up. They continued to battle to the end. I'm looking forward to seeing what this team will do next year!