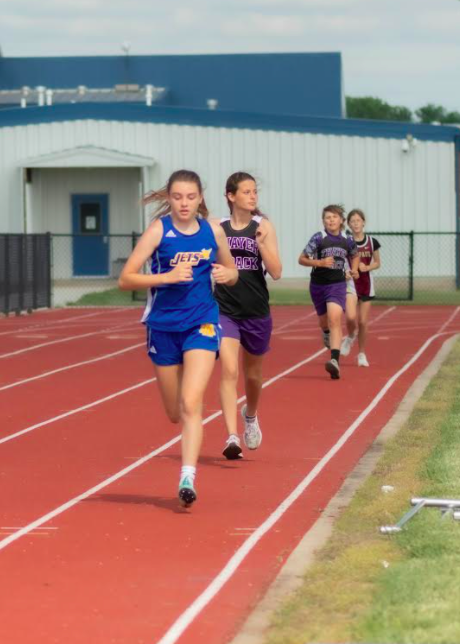 The pair also claimed three silver medals – with Stackhouse earning two of them – to once again outshine the competition as they have all season.

But it was far from just a two-person story for Altoona-Midway. Five other Jet athletes picked up at least one silver medal apiece in the season-ending league meet. Overall, five of the seven AMMS athletes picked up points for the Jets in multiple events.

“This is the meet we had been working towards all season, so I know the kids gave it their best,” said Jet head coach Chary Weilert. “Once again, our two eighth graders set the pace with outstanding performances. I couldn’t ask for a better pair of athletes to serve as role models for our younger kids.

“Emmalynn Pupanek and William Stackhouse will be sorely missed when the season rolls around next season,” Weilert added.

Jets assistant coach Nikkita Almond, who focused primarily on the jumpers for AMMS, also reflected on the season.

“Watching our athletes improve off and on the track has been so much fun this season,” Almond said. “I couldn’t be more proud of how they competed at each meet.”          Stackhouse jumped 4-10 to win the high jump competition and set a personal record (PR) in the 200 meter run, taking the gold in a time of 28.74.

Pupanek claimed her silver medal as part of the Lady Jets’ Medley Relay squad, which also compiled a PR time of 2:26. Other Jets on the runner-up medley relay unit were Tiger, Morales, and Drake.

Tiger placed in three MBL events, both with PR throws. She earned a second silver medal in the discus at 65-3, and heaved the shot 25-3.5 to place sixth.

Morales added a fifth-place finish in the discus with a toss of 53-4.25.

On the boys’ side of the competition, Beck and Wittlake added to Stackhouse’s point totals.

Kyler Nalley also competed in the shot put and discus for the Jets, but his two eighth-place finishes left him out of the money in both events.

Altoona-Midway finished third in the boys’ A division and fourth in the girls’ standings. Thayer boys and St. Paul girls claimed team championships.

Complete team totals were as follows: