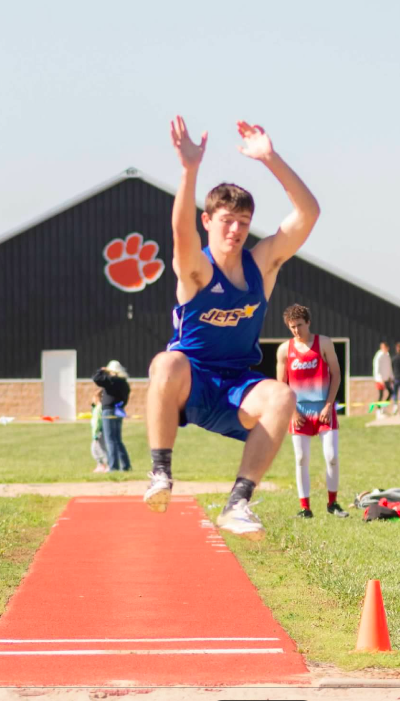 OSWEGO – Altoona-Midway High School seniors Josh Meigs and Alex Troutman
are both Three Rivers League track champions.
The two gold medals awarded to Meigs and Troutman were part of seven total
individual medals garnered by members of the AMHS track squad at the league meet held
here Thursday. Both the boys’ and girls’ 4x100 relay teams also medaled in the TRL
event.
“Coach (Lane) Huffman and myself are both very proud of how well our athletes
competed,” said Jet coach Michelle Morales. “It’s very nice to bring home some medals
from the league meet.”
Meigs picked up his gold medal in the boys’ long jump competition with a winning
distance of 18 feet, 4 inches. Troutman grabbed first-place honors in the javelin with a
throw of 145 feet, 3 inches.
Meigs garnered three medals on the day, while Troutman was one of five Jet
thinclads who took home two medals from the TRL event.
Dalton Smith joined Troutman from the boys’ squad as a double-medal winner at
the league meet, as did Lady Jets Mariah Stackhouse, Abi Elsesser, and Heather Lane.
Also picking up TRL hardware were Jackson Ashmore and Anna Beckwith, as
members of the respective 4x100 relay units.
In addition to long jump gold, Meigs was the silver medal winner in the 300 meter
hurdles, where he ran a personal best of 52.12.
Stackhouse fired the discus a personal best 78-8 to earn the bronze medal in that
event.
Personal bests were also recorded by Lane, fifth place in the girls’ high jump at 4-6;
Smith, sixth place in the 800 meter run with a times of 2:23.48; and Elsesser, sixth place in
the girls’ 100 meters with a time of 14.41.

Both AMHS 4x100 relay teams placed fifth. Troutman, Ashmore, Smith and Meigs
comprise the boys’ relay unit and finished with a time of 49.87. The Lady Jets squad,
which had a PB of 58.61, was made up of Elsesser, Stackhouse, Lane and Beckwith.
“We were very pleased to see we had several more personal bests last night,”
Morales noted. “The regional track meet will be May 21 and we are proud to say that we
are able to have the majority of our team qualified to compete at regionals, with a big
chance of a few going to state this year. It’s been a good season so far, and we’re not done yet!"