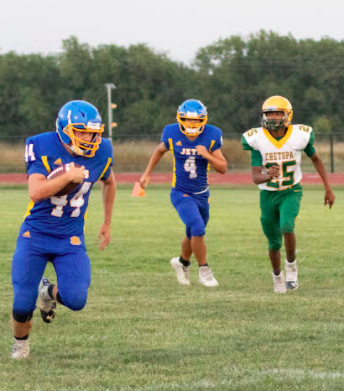 Unfortunately, the visiting Chetopa Hornets did not read the script, and instead ruined the potential cinematic climax.

Trailing 44-22 entering the final stanza, the Jets caught fire and scored three straight touchdowns to tie the game at 44. Senior Dalton Smith, who was also selected Altoona‑Midway’s Homecoming King earlier in the evening, led the Jet rally, much to the delight of 2021 AMHS Homecoming Queen Mariah Stackhouse, their Court, and the enthusiastic home fans.

But the miracle finish was not to be, as Chetopa scored on a 45-yard touchdown pass with only two minutes remaining, ruining the Jets rally and giving the Hornets a hard‑fought 50-44 victory in the Three Rivers League eight-man thriller.

“We really had our chances to win this game,” said AMHS head coach Chad Raida. “We had two touchdowns called back on penalties. We have preached to the guys that we have to take care of the ball and we didn’t do that tonight.  We turned it over six times once again.  It’s very hard to win a game when you turn it over that many times.

“Still, the guys played hard and had a great comeback,” Raida noted. “This was a tough one to lose.”

Smith did everything but sell popcorn in the concession stand at halftime Friday night. After being named homecoming king prior to the game, Smith scored five touchdowns for the Jets, three coming on runs from scrimmage in addition to taking two exhilarating kickoff returns (75 yards and 65 yards) to the house.

Smith also rushed for 147 yards from scrimmage, giving him nearly 300 yards total offense on the evening. The senior also had five tackles on defense.

“I’m really proud of Dalton tonight.  He has worked hard in the weight room all summer and it showed tonight. He basically just put the team on his back. It was an incredible performance.”

However, Chetopa responded with three more scores – two of them set up by Jet turnovers – and led 26-16 at halftime.

The Hornets scored on the final play of the third period to boost their lead to 44-22. Then things got interesting.

Kicking off to begin the fourth quarter, Smith returned it 65 yards for the score to ignite the furious AMHS rally. Smith added a TD run from scrimmage later in the period, and the Jets had closed the lead to 44-38.

Senior Matthew Morris, who had an excellent night of his own, then picked off a Hornet pass to put the Jets back in business. Morris rambled the final 18 yards from scrimmage to knot the score at 44-44 with under three minutes remaining.

“We actually had a chance to take the lead with the conversion, but for one of the few times on the night (the Jets made 4-of-6) we failed to convert the PAT,” Raida noted. “We were fired up and that might have really sent us over the top if we had gone ahead at that point.”

Instead, moments later Chetopa hit the long pass to regain the lead and Altoona‑Midway was unable to rally one last time.

“I’m proud of the kids,” Raida said. “This gives us something to build on. We’ll work on reducing the mistakes and we’ll come out fired up next week.”

Altoona-Midway, now 0-4 both overall and the TRL play, will hit the road this week, traveling to St. Paul. Kickoff is set for 7 p.m.

Prior to Friday night’s game, seniors Mariah Stackhouse and Dalton Smith were crowned as the 2021 Homecoming Royalty for Altoona-Midway High School.

The 2021 Homecoming theme was “Neon Lights.” Students were encouraged to wear black clothes with neon accessories to the homecoming game. Members of the AMHS Student Council were also available for face-painting prior to the game.

A homecoming dance honoring Queen Stackhouse, King Smith and the Court was held following the game at Milo Peterson Gymnasium.