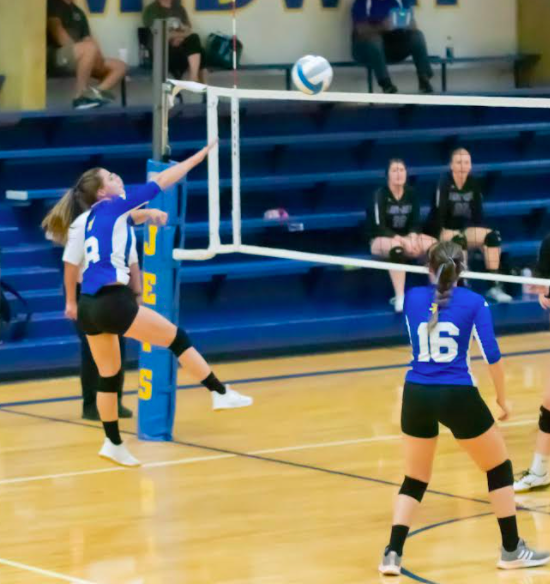 BUFFALO – The Altoona-Midway High School volleyball team played two close matches here Tuesday night, but were unable to finish on top in either one of them.

Then in the nightcap at Milo Peterson Gymnasium, AMMS won the opening set against Southeast, 25-17, but couldn’t maintain the momentum. The Lady Lancers bounced back to win the second set 25-14, and then outlasted the Lady Jets 25-20 in the deciding third set.

“Tonight the girls played hard, just not hard enough,” said AMMS head coach Michelle Morales. “We need to not get down so easily and dwell on our mistakes. That's our biggest fallback.

“The girls sometimes get to second-guessing themselves and then more mistakes happen,” Morales added. “That's one of the hardest things to work on but we will be working on ways to bring each other up and move on to the next point.”

Still, Morales saw some very positive moments from all of her players, including the return to action of senior Abi Elsesser, who been out since early in the season due to injury.

“I feel like our girls are really improving with each match we play. You can see them moving as a team on the court and it's amazing to see that,” Morales said. “Mariah (Stackhouse) had a great night tonight, and Abi did well coming back from her injury. It was great seeing her jump right back in.

Summer Raymond led the Lady Jets with eight assists and two blocks. She also had four serves and an ace.

Other contributions came from Pupanek with four kills, one block, eight passes and an ace; Elsesser with three kills, one ace and six passes; Graham with five assists; and Stewart with seven passes.

Graham handed our four assists, six serves and laced an ace, Relph added two kills, nine serves and 11 passes and a block; Pupanek was credited with a block, seven passes and three serves; and Steward chipped in with seven passes.

The Lady Jets junior varsity is scheduled for action Thursday at Oswego. Meanwhile, the next varsity action for Altoona-Midway (3-20) will be Tuesday, Oct. 5, at the Chetopa Triangular.