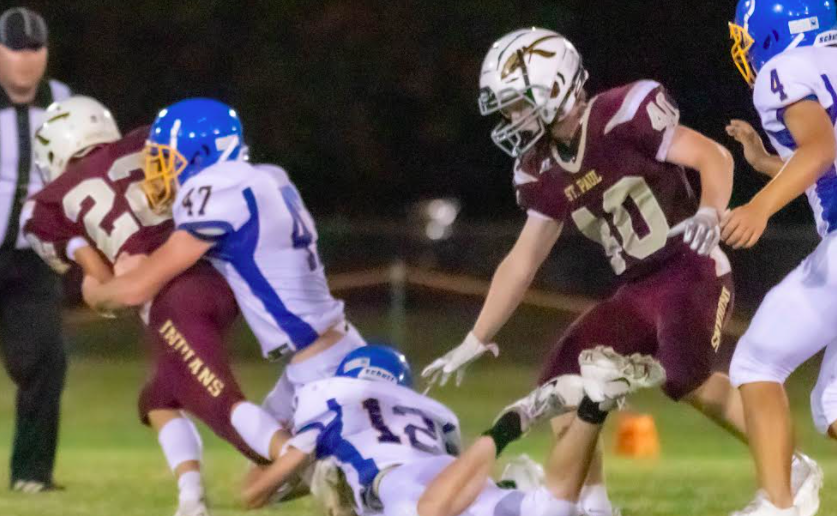 ST. PAUL – The St. Paul Indians made quick work of the Altoona-Midway Jets here Friday night, rolling to a 52-0 victory in a Three Rivers League eight-man contest that ended after just two quarters.

St. Paul, benefitting from several AMHS turnovers, scored early and often as the Indians piled up the huge lead in a district mismatch that was called at halftime due to the mercy rule.

“We just got beat on both sides of the ball,” said Altoona-Midway head coach Chad Raida. “St. Paul has been in the weight room and it showed.  They we’re way more physical than us.

“To make matters worse, we turned the ball over twice in each quarter, and they capitalized on every one of them,” Raida noted. “It was an ugly game.”

St. Paul used the first two Jet miscues to build a 22-0 lead at the end of the quarter. Things didn’t change when the teams flipped sides, as the Jets would throw two interceptions and be forced to punt twice in the second period as they were unable to get on the scoreboard for the fourth time this season.

Most of the offense AMHS was able to muster came from the rushing of senior Dalton Smith, who finished with 60 yards on 10 carries.

“We have to get better at taking care of the ball when we host Southern Coffey County next week for senior night,” Raida said.

Altoona-Midway, now 0-5 both in TRL play and overall, will step out of league action this Friday, hosting Southern Coffey County. Parent Night festivities are also slated for Frank Kennedy Field. Kickoff is scheduled for 7 p.m.