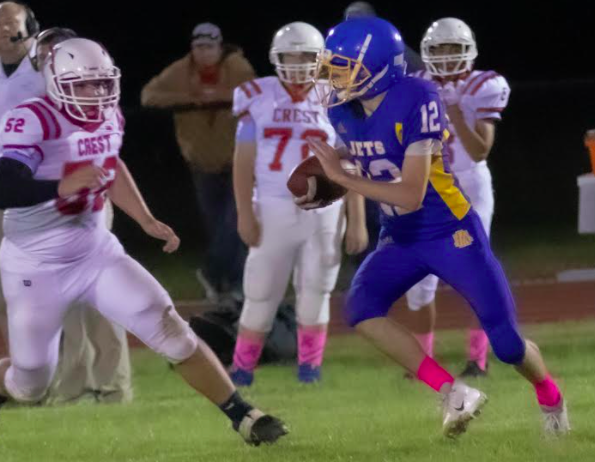 BUFFALO – Having to cancel games on back-to-back Fridays in the middle of a season will cause complications for any football program, and the Altoona-Midway Jets are no exception.

Playing for the first time in three weeks due to quarantine issues, the Jets were unable to get untracked and dropped a 52-6 decision to Crest High School here Friday night at Frank Kennedy Field.

The Three Rivers League eight-man contest was called at halftime due to the mercy rule.

There were not a lot of highlights for the home squad, but one occurred when the Jets, who had been shut out in four of their previous five games, reached paydirt on a nice pass play from junior Brandon Johnson to freshman William Stackhouse.

“It was nice to get on the scoreboard,” said AMMS head coach Chad Raida. “The kids played hard as they always do, but we just couldn’t get a stop.”

Johnson finished 3-for-14 through the air for 78 yards, but had three interceptions to go along with his TD pass. Stackhouse finished with 70 yards in receiving, and senior Dalton Smith led the rushing attack with 32 yards on nine carries.

Defensively, Johnson and sophomore Jacob Meigs were each credited with four tackles.

Altoona-Midway finished the regular season 0-6 overall and 0-3 in district play, and thus did not qualify for the Eight-man Division II state football playoffs. Only 32 of the 52 schools in the eight-man, Division II classification qualify for the postseason.

Crest, 5-3 in the regular season, will open playoff action Thursday when they travel to Melvern to take on Marais des Cygnes Valley, also 5-3.

At press time, Altoona-Midway school officials were still attempting to schedule a game Thursday with another non-playoff team.