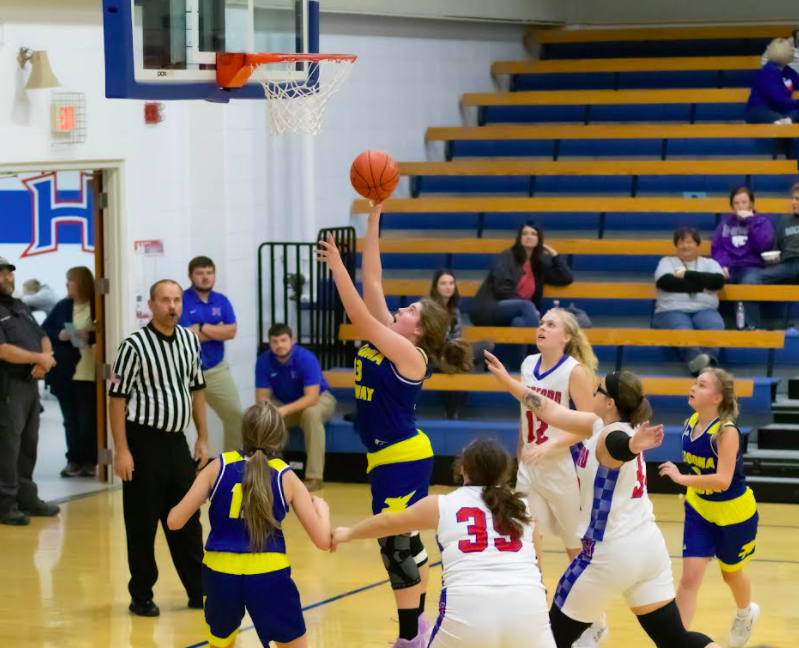 HARTFORD – It’s said, “you have to play the first game to know what to work on for the second game.”

Both Altoona-Midway High School basketball teams found that out as they opened their 2021-22 seasons on the losing end of games here Friday night against the Hartford Jaguars.

Both the Jets and Lady Jets fell to 0-1on the season. Both squads are scheduled to participate in the Marais des Cygnes Valley Tournament this week at Melvern. Games are slated for Tuesday, Thursday and Friday nights.

Altoona-Midway played an excellent first quarter, trailing just 12-10 after the first eight minutes. But the Lady Jaguars pulled ahead 37-14 at haltime and increased that margin by another seven points after intermission.

“The girls played a good first quarter and were only down two,” said AMHS head coach Randy Almond. “But from the second quarter on, we were plagued by turnover issues.

“Still, there were some bright spots and we can build on … and several areas we need to work on,” he noted.

The Lady Jets were led offensively by sophomore Summer Raymond, who finished with nine points, and freshman Emmalynn Pupanek, who scored eight.

“It was good to see all the girls contributing to the scoring,” Almond said. “Overall, it wasn’t a bad first outing.”

It was a similar story in the boys’ game. Altoona-Midway trailed just 16-9 after one period of play, but the Jaguars increased that advantage to 35-15 by intermission.

Each team scored 21 points in a high-scoring third period, but the Jets managed just one point during the final quarter while the Jags added 16.

“Right from the start, we failed to execute on offense and defense,” noted Lane Huffman, head coach for AMHS. “On the defensive side of things, we didn’t do the little things, and Hartford was able to capitalize each time.”

Hartford’s duo of Shayden Shull and Ali Smith combined for 37 points to pace the Jaguars.

Jackson Ashmore led the Jets with 13 points, while Harvey Lopeman finished with seven points, all coming in the third quarter. The Jets also got six points from Jacob Meigs, four each from Dalton Smith and Andy Tiger, and William Stackhouse added two.

“Despite not scoring a lot, William played a lot of minutes as a freshman, and I was proud of his effort,” Huffman said. “He kind of got thrown into things as we have four guys out right now. He’s going to improve and help us this season.”

AMHS jumps back into action this week with the MDCV Tournament, opening with Southern Coffey County.

“If we pick up the effort and intensity, we have a chance to erase what happened tonight and put some tallies in the win column,” Huffman said. “It’s going to take a lot of focus and discipline to execute the proper game plan.”