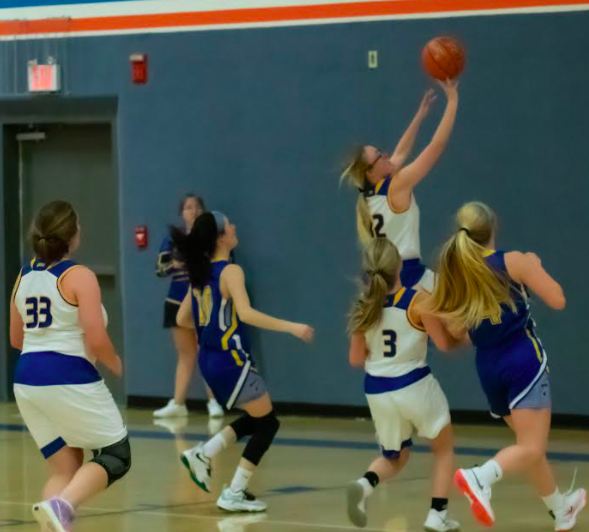 MELVERN – The boys’ and girls’ Altoona-Midway High School basketball teams showed improvement from their opening night games, but it wasn’t enough to translate into the win column here Monday night. Both AMHS teams came up on the short end of their respective opening round games against Southern Coffey County in the Marais des Cygnes Valley Tournament.

In the boys’ contest, the Jets led after one period but couldn’t sustain that advantage, eventually falling to SCCHS 55-38. The Lady Jets also played well but finished with a 59-35 setback against the Lady Titans.

Both AMHS squads will return for action Thursday and Friday night in the tournament.

The Jets came out like gang-busters, as senior Jackson Ashmore poured in 11 first-quarter points and a strong man pressure by the AMHS defense to post a 13-10 lead after the first eight minutes.

But the Titans regrouped and started using their height advantage. SCC bounced back to lead 26-17 at halftime, and increased their advantage to 41-28 after three periods, eventually posting the 55-38 victory.

“Jackson had a great first quarter and our man pressure got them out of their comfort zone,” said AMHS head coach Lane Huffman. “We had them doing some things they didn’t want to do, but that intensity simmered out.”

Rebounding also was a problem for the Jets.

“They used their length to get rebounds. We gave them 3-4 shots every possession, it’s hard to win like that,” Huffman noted. “Our biggest concern was rebounding and defense… we failed to succeed doing both of those things.”

Ashmore finished with 20 points to pace the offense, but was the only Jet to reach double figures. Andy Tiger scored seven points, Harley Lopeman added five, and Jacob Meigs and Dalton Smith each scored three.

“Blaine Collins stepped up and played some defense for us tonight,” Huffman added. “He’s on his way to earning more minutes this season.”

The Lady Titans led 14-7 after one and 25-13 at halftime. Both teams enjoyed a high-scoring third quarter, with SCC gaining a 16-15 advantage to lead 41-28 entering the final period. The Lady Jets were unable to sustain that pace down the stretch as Southern Coffey County increased its lead to a final margin of 59-35.

“The girls were able to get a few fast breaks tonight, and we had a lot less turnovers than opening night,” said Lady Jets head coach Randy Almond. “The third quarter we surprised them as Summer (Raymond) and Kyra (O’Connor) hit back to back three-point shots. We had good offensive production in that third period, but we just couldn’t sustain it.”

Almond also pointed out the Lady Jets had a hard time competing on the boards.

“Their size advantage down low caused us some difficulties getting rebounds or blocking shots,” Almond said. “Mariah Stackhouse and Emmalynn Pupanek both had to work hard to get a half-dozen defensive rebounds tonight.”

The Lady Titans enjoyed a strong one-two punch offensively from Weers and Snovelle. Weers fired in 14 second-half points en route to a game-high 22, while Snovelle connected on six three-pointers and finished with 20 points.