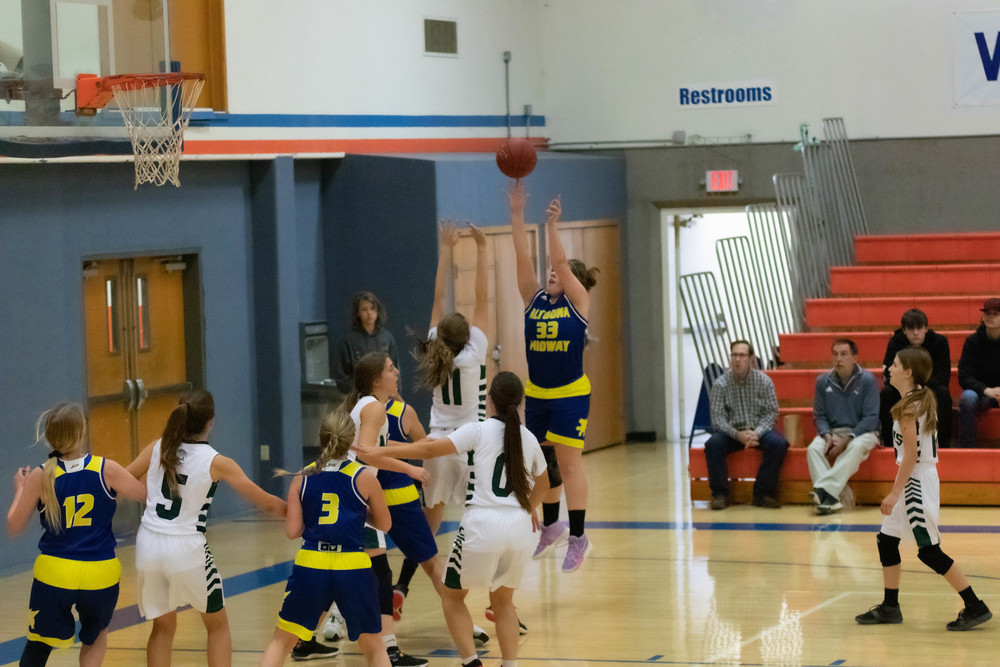 MELVERN – The streak is over.

For the first time since 2014, the Altoona-Midway High School girls’ basketball team walked off the court on the winning side of the scoreboard.

But “walked off the court” is a bad description. After the Lady Jets posted their long-awaited 41-21 triumph over Liberty Christian Home School here Thursday in the Marais des Cygnes Valley Tournament, “dancing on air” or “leaping in ecstasy” would likely be a better depiction – at least on the inside.

“I have seen these girls lose with dignity, and tonight I had the privilege to see them win with class,” said an emotional AMHS head coach Randy Almond. “At the final buzzer, there was no disrespectful celebration on the court. Liberty had a fine team, played hard and were well-coached. Our girls won with class and then celebrated in the locker room.”

Withholding an unbridled celebration on the court was very commendable, considering:

- The victory snapped a 116-game losing streak for the Lady Jets, which last recorded a win by forfeit over Crest on March 2, 2015 in what should have been a first-round sub-state game.

- The last time the Altoona-Midway girls won a regular-season game was Feb. 22, 2011 versus Northeast, a string of 188 games.

“Tonight, the Altoona-Midway Lady Jets left it all on the court. They played hard, and I am very proud of all of them,” Almond said. “It has been a long losing streak, but these girls – and the girls that came before them – always handled themselves with dignity. They deserved this win, and I couldn’t be happier for them.

“This is a good win for the girls, the school, and the Lady Jets basketball program,” Almond added.

Senior Mariah Stackhouse exclaimed, “We came out believing we could win, and we did! “I’ve been playing varsity for four years, and it felt great to get this win.”

Junior Kyra O’Connor said, “We were very happy to get the win. It’s a good feeling when all the hard work pays off.”

“You miss 100 percent of the shots you don’t take,” added sophomore Summer Raymond. “That’s why I don’t give up.”

But Almond pointed out it was a true “total team victory,” and lauded the contributions of every single girl who suited up for the Lady Jets. He pointed out freshmen Autumn Raymond and Emmalynn Pupanek scored four important points apiece, and especially pointed out the contribution from sophomore point guard Ava Hufford.

“Ava may not have scored for us tonight, but she played a superior defensive game,” Almond said. “She had several steals and was always in the middle tying up the ball.”

“I was disappointed I didn’t contribute point-wise,” Hufford said, “but I feel I made up for it with steals and assists.”

Altoona-Midway basically led from wire to wire. The Lady Jets led 11-7 after one quarter and 20-13 at halftime. AMHS had a 32-20 advantage entering the final period, and then sealed the deal with tremendous defense, outscoring Liberty 9-1 over the final eight minutes.

“Tonight's win was a huge step for the program,” said AMHS athletic director Jeff Almond. “The success began during the middle of last season. A change came over the program and the girls bought into what was being taught.

“Coach Almond has done a great job with this team.  He understands that coaching is not just about teaching but building relationships.  With relationships, comes trust.  I could not be more proud of the program and the direction it is moving.”

With the victory, the Lady Jets move to 1-2 on the season. They were slated to return to Melvern Friday to resume action in the final round of the MdCV Tournament.