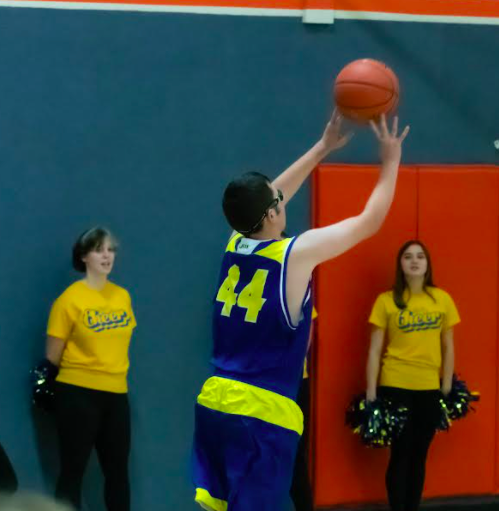 MELVERN – Just one day after both squads had posted victories, the Altoona-Midway High School basketball teams returned to complete play in the Marais des Cygnes Valley Tournament here Friday. Unfortunately, the host MDCV cagers were not very hospitable to their guests, as the Trojans defeated AMHS in both contests.

In the boys’ matchup, Marais des Cygnes Valley recorded a 63-43 victory. The girls’ game saw the Lady Jets fall by a 50-30 count.

The AMHS squads, both 1-3 on the season, will return to action Tuesday, traveling to Rosalia to square off with Flinthills High School. Those contests will complete the pre-Christmas portion of the schedule for Altoona-Midway.

The AMHS boys, fresh off their first win of the season (44-38 over Peabody on Thursday), got off to a quick start against MDCV, leading 15-14 after one period. Dalton Smith paced the Jets with eight points in the quarter, including a pair of treys.

But the Trojans responded, pouring in 27 second-quarter points to grab a 41-24 lead at halftime.

“We started off well. Dalton had a hot first quarter, and as a team we moved the ball well, and found our spots,” said Jets head coach Lane Huffman. “But giving up 27 points versus our nine in the second quarter proved to be too big of a hole to dig ourselves out of.  (MSCV) played a great mix of zone and man defense to keep us from gaining any sort of rhythm back.

“They are very well coached and I’m going to guess they are probably one of the most improved teams in our area for sure,” Huffman added.

The second half was pretty much a draw and both schools played a lot of reserves.

“It was awesome to see some younger guys and guys that typically don’t play much to go at it for the last 10 minutes or so. It was intense and I’m proud of those guys.” Huffman said.

“Our biggest highlight had to be junior Drew Miller coming in the last two minutes and drilling his first 3-point attempt,” Huffman added. “The crowd and benches of both communities filled the gym with noise. Drew works hard and he took advantage of the opportunity.”

Miller and Kieran Foster scored three points each and Lane Poeverlein added one.

The Lady Jets snapped a long losing streak just 24 hours earlier (a 51-31 win over Liberty Homeschool Alliance), but were unable to duplicate that outcome versus MDCV.

AMHS started off well, trailing just 12-10 after one period. But the Lady Trojans increased the margin to 21-13 at halftime, and pulled away to a 39-20 advantage entering the final period, finishing with the 50-30 victory.

“We just didn’t come out tonight with the same intensity that we showed against Liberty,” said head coach Randy Almond. “(MDCV) has a deep team which caused us problems. They were able to platoon while we had seven players – two of whom fouled out. The pace of the game definitely took its toll.”

Summer Raymond canned a pair of three-pointers in the first period to keep Altoona-Midway close. The talented sophomore finished with a team-high 14 points before fouling out. (AMHS point guard Ava Hufford was also disqualified by fouls.)

Senior Mariah Stackhouse chipped in with eight points, and freshman Emmalynn Pupanek tossed in five. Autumn Raymond and Kyra O’Connor rounded out the scoring for the Lady Jets with two and one point, respectively.

“(MDCV) was much more aggressive and more physical than we were,” Almond said. “But, there were still bright spots. We will continue to work hard and improve.”