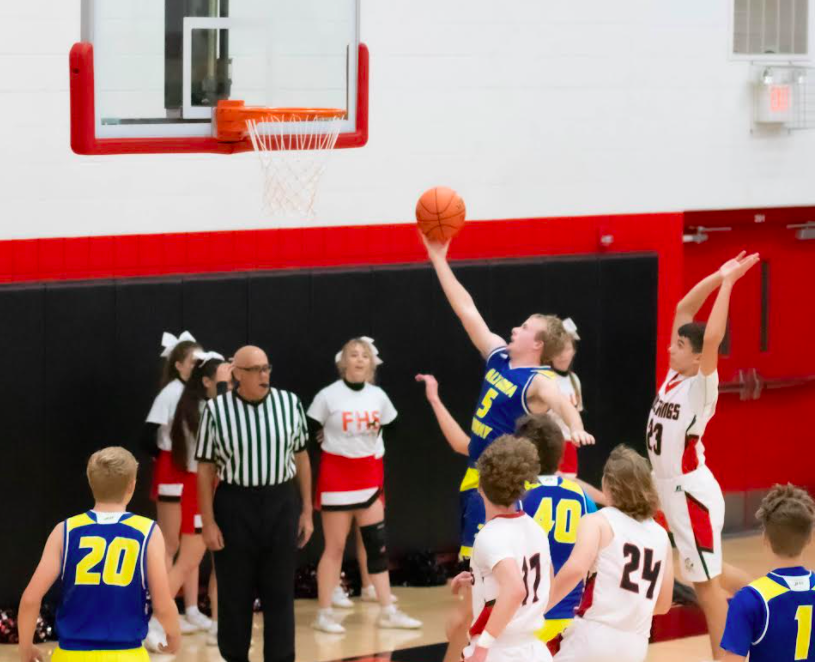 ROSALIA – The Altoona-Midway High School basketball teams were hoping to get a pair of wins as early Christmas presents here Tuesday night, but the cagers from Flinthills High School decided to play Grinch instead, sweeping both ends of the non-conference doubleheader.

The twinbill closed out the pre-Christmas portion of the Altoona-Midway schedule. Both the AMHS boys’ and girls’ squads will resume play in the New Year sporting 1-4 records.

Altoona-Midway is next schedule for action Jan. 4 in a Three Rivers League doubleheader at Chetopa.

The Jets played well early in the contest and held the lead at halftime, but Flinthills rallied in the second half for the 63-50 win.

AMHS led 12-7 at the quarter and 23-22 at intermission. But the Mustangs used 16-8 third-quarter bulge to take command 38-31 entering the final period. Flinthills withstood a rally by the Jets and eventually outscored AMHS 25-19 in a wild fourth quarter.

“We had a great surge in the fourth quarter to get their lead down to six (56-50),” noted Jets head coach Lane Huffman. “But we failed to score again and Flinthills finished on a 7-0 run.

“We started the game really strong with good ball movement and pressure defense,” Huffman noted. “However, we followed the same trend of games past as we slowly lost our intensity as the game progressed. We didn’t handle adversity well, and slowly let Flinthills take over the game.”

Senior leadership was quite apparent as the Jets’ Jackson Ashmore poured in 24 points and Dalton Smith fired in 15. Unfortunately, AMHS was able to muster just 11 points from the remainder of the roster.

“The team did things better defensively at the start of the game, compared to recent games,” Huffman noted. “Our focus needs to be to put all four quarters together. Christmas break is coming and it gives us an opportunity to fine tune before league play.

“This includes myself; I’m going to spend the next two weeks bettering myself as well,” the coach commented. “I want my players to constantly know I support them. I plan to bring a more positive approach moving forward.”

Already lacking depth and with their two leading scorers attempting to battle through illness issues, the Lady Jets were no match for the host squad in the opening game.

The Lady Mustangs led 9-4 after one period, but built the advantage to 25-9 at halftime and 42-17 after three periods before coasting to the 56-26 victory.

“Definitely not our best outing. It was the same old song – turnovers took its toll,” said AMHS head coach Randy Almond. “We started out okay, but in the second quarter we didn’t handle the press and the most of the turnovers resulted in quick and easy baskets for Flinthills.”

The Lady Jets two leading scorers thus far this season – Mariah Stackhouse and Summer Raymond – were both under the weather and saw their playing time reduced as a result. Stackhouse still fired in 16 points to pace the AMHS attack. However, Raymond was unable to reach the scoring column.

“Summer averages double digits, so we really missed her production tonight,” Almond noted. “With her inability to play and score, we needed someone to step up offensively.

“I also want to thank the loyal fans who have been so supportive with five straight road games to start the season,” Almond added.