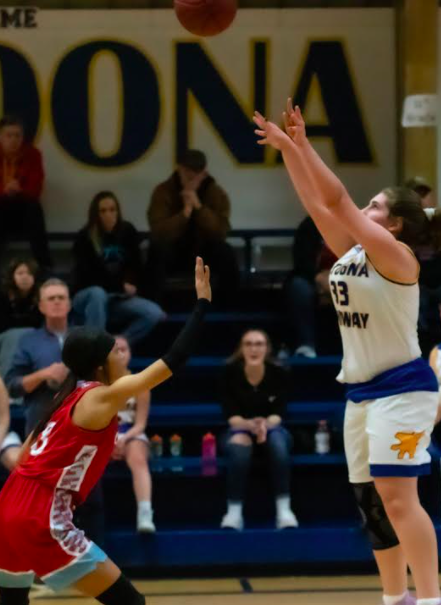 BUFFALO – After several road games in December and another following a long layoff for Christmas break, the Altoona-Midway High School basketball teams finally got to play before their home fans Friday at Milo Peterson Gymnasium.

Unfortunately, neither squad was able to reward the home crowd with a victory as Crest High School posted a 62-44 victory in the boys’ game, after the Lady Lancers had come from behind to post a 42-35 hard-fought triumph in the girls’ contest.

Both AMHS squads will return to action Tuesday, remaining at home to host Oswego in another Three Rivers League doubleheader.

Altoona-Midway suffered a cold-shooting first quarter and could never recover as Crest led from start to finish in its 62-44 win.          The Lancers built an 18-6 advantage after one period, led 30-15 at the half, and 42-29 after three periods.

“We struggled to score in the first quarter and that was the trend in the second quarter as well,” said AMHS head coach Lane Huffman. “Our hall movement was slow and we weren’t finding shots in the paint. We moved the ball much better in the second half which translated to us scoring the ball a little better.

“Despite being down, we battled in the second half cutting the lead to 10 twice,” Huffman added. “Every time we’d get on a run, Crest had an answer. They played well, hats off to them.”

“We just did not have the answer to stop Crest. They hit eight 3-pointers where we really failed to hit shots from three,” Huffman said. “We did achieve the goal of limiting turnovers. We only turned the ball over 10 times versus Crest turning it over 15. If we can keep that trend rolling, as well as hitting some shots, we’re going to be a tough team. But moving forward we need to come out of the gates a little more focused.”

The Lady Jets held a four-point halftime lead in their TRL opener, but foul trouble, combined with a barrage of 3-point field goals by Crest, resulted in a 42-35 victory for the Lady Lancers.

“We came out in the first half really wanting this game,” said AMHS head coach Randy Almond. “Fouls took their toll in the fourth quarter and we had to play some freshmen off the bench, but the girls played hard.”

The Lady Jets led 20-16 at halftime, and trailed just 31-30 entering the fourth quarter before Crest pulled away. The Lady Lancers benefitted from four three-point field goals in the second half by Lindsey Godderz, who finished with a team-high 14 points; and Kayla Hermreck, who scored all nine of her points after intermission. Beckman also reached double digits for Crest with 11.

Mariah Stackhouse had a great game for Altoona-Midway. The senior post player fired in 16 first-half points in leading the Lady Jets to the halftime advantage, and finished with a game-high 23 points.

“We shot 48 percent in the first half, but cooled off to just 24 percent in the second half,” Almond noted. “We also have to get tougher under the boards and block out better. It was a disappointing loss, and we still have areas to improve on, but all in all I was very proud of the way the girls battled.”