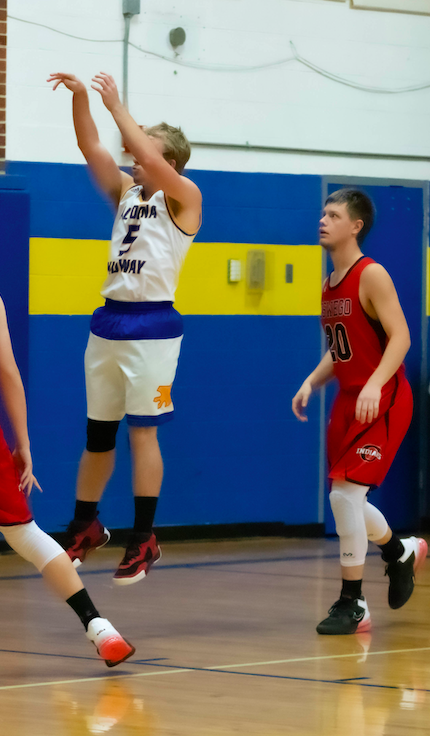 “We came out a little slow again tonight, but we battled and kept it close throughout the night,” said AMHS head coach Lane Huffman. “Both teams came to play, and it came down to the final possession. Hats off to Oswego – they had an answer each time we went on a run.”

The game was nip-and-tuck the entire way. The Jets trailed 26-23 at halftime and 39-35 entering the fourth period. AMHS outscored Oswego 14-12 in the final frame, but still came up two points short.

“Despite the loss, there was a lot to learn from tonight. We faced adversity, and handled it well from the top to bottom of the roster,” Huffman said. “Jacob Meigs had been in a shooting slump, he put in some extra work and it paid off. He hit several clutch shots keeping us in the game.

“Dalton Smith stepped in and played some point guard for us and also hit four free throws in the fourth quarter. He's a hard-working senior that played well tonight. Andy Tiger played big in the post and that translated to us getting him the ball all night long.

I'm very pleased with senior Jackson Ashmore. Each week I put him in a different spot or role and he steps up to the plate each time,” Huffman said. “He has a tough job, I truly believe he is one of the best players in our league, and he battles through tough defenders and double teams every night. He scores when he can, but he's always looking to get the team involved.”

The Jets enjoyed a balanced attack offensively. Tiger led the way with 13 points, while Ashmore and Meigs tallied 12 and 11, respectively, and Smith finished with eight.

“We're also getting quality minutes from freshman Kieran Foster (three points) and Will Stackhouse (two points),” Huffman noted. “They're both stepping up to the plate.

“A huge thank you to our fans as well. It was a loud Tuesday crowd and it was much appreciated. While we wanted to come out on the other side of the scoreboard, I know we’ll fix the small things and go to work Friday at Uniontown.”