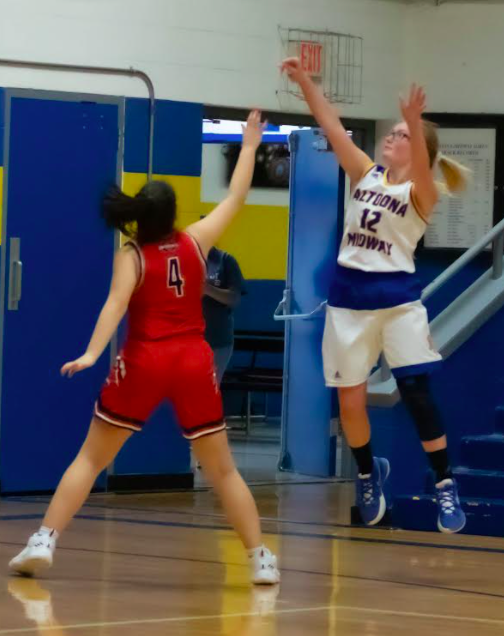 BUFFALO – Eleven years ago … this year’s seniors were in first grade; this year’s freshmen weren’t even in preschool; and the Altoona-Midway High School Lady Jets last won a league basketball game.

This year’s edition of the Lady Jets, who snapped a 188-game regular season losing streak earlier this season, continued their assault on the record book with a pulsating 42-38 Three Rivers League triumph over the Oswego Lady Indians here Tuesday before an appreciative crowd at Milo Peterson Gymnasium.

The win cracked a stretch of 93 consecutive losses in league play by the AMHS girls, dating back to Feb. 22, 2011, when the Lady Jets took down Northeast High School.

Unofficially, it’s believed likely to have also been that long since the Lady Jets were victorious in a home game.

“Game after game during this streak, these home fans have come out and given the girls outstanding support. It felt very satisfying to give the home crowd a well-deserved win,” said AMHS girls’ head coach Randy Almond.

“As for the girls, I can’t say enough about every one of them. It was truly a total team effort,” Almond added. “They showed a lot of heart and battled to the end, proving that hard work pays off. All in all, I was very proud of all my girls.”

The Lady Jets came out slowly and trailed 6-4 after one period, but bounced back to take a 20-19 lead at halftime. Oswego regained a slim 30-29 advantage after three quarters, but the Lady Jets outscored the visitors 13-8 down the stretch to post the record-breaking victory.

“We couldn’t get anything to fall in the first quarter, but the girls came out to play in the second quarter,” Almond noted. “The intensity was there, and the girls played hard and battled the rest of the game.

“We finished with a season-high 42 points,” he continued. “Mariah (Stackhouse) again led us in scoring, but Ava Hufford did a great job running the offense and contributed on the scoreboard as well.

“We also got some great minutes out of our three freshmen – Emmalynn Pupanek (who starts), Autumn Raymond, and Lexi Lopeman. All of them played great defense and improved their blocking out on the boards.          Stackhouse finished with 19 points to lead all scorers, including eight big points in the crucial fourth quarter. Summer Raymond hit a pair of treys and ended with nine points, while Kyra O’Connor contributed six points despite being saddled with three fouls in the first quarter.

Rounding out the scoring for the Lady Jets was Pupanek with four, and two each by Hufford and Autumn Raymond.

Oswego got 17 points from Mae Albertson and 11 from Dezi Trotnic.

“We still have to work on taking care of the ball and keeping out turnovers down,” Almond said. “We did better at blocking out, but still need improvement there.

“But it felt so good to give the home crowd a win. They deserve this, and the girls deserve this. I am definitely a proud coach.”

The Lady Jets improve to 2-5 overall and even their TRL mark at 1-1. AMHS travels to Uniontown on Friday.