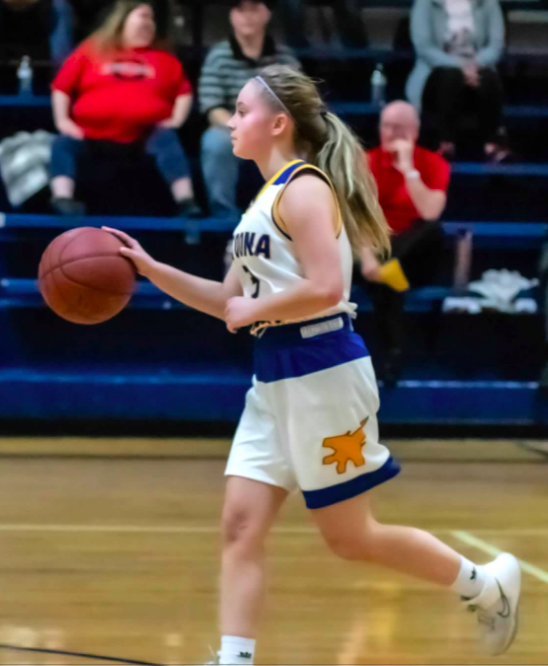 UNIONTOWN – The short-handed Altoona-Midway Lady Jets hung tough for three quarters, but finally succumbed to the Kansas City Christian girls 27-20 here Tuesday afternoon in the opening round of the Uniontown Midseason Classic.

Meanwhile, the AMHS boys’ squad ran into a buzz-saw in their opening contest of the tourney, as the KC Christian boys team rolled to a 59-22 triumph.

Both Altoona-Midway teams will return to Uniontown on Thursday to continue tournament play against the host school. The Lady Jets will meet Uniontown at 5 p.m. with the boys game at 6 p.m.

The Lady Jets were able to suit up only five players for the contest, and they were also without their head coach Randy Almond. Despite those obstacles, AMHS was still within one point entering the final eight minutes.

“We were small in numbers, but I was so proud of the five girls we had on the court tonight,” said AMHS assistant coach Lea Chickadonz, who took the reins after it was learned Almond would have to quarantine. “We battled all the way, and everyone contributed to the score and worked hard on defense.”

The game was nip-and-tuck most of the way. Altoona-Midway led 4-3 after one quarter, trailed 9-8 at halftime, and led 16-15 with just seconds remaining in the third quarter before KCC scored the next six points.

A basket by Mariah Stackhouse brought the Lady Jets within 21-18 midway in the final quarter, but KCC outscored AMHS 6-2 down the stretch to secure the win.

“Kyra, Mariah and Emmalynn did a great job teaming up low on defense and blocking out,” Chickadonz said. “Ava did a good job driving to the basket and dishing it to the posts, and Summer’s hustle on defense led to a few fast breaks.”

“Every Tuesday game, we talk about how the energy level has to be high right out of the gate. We've always struggled to match the energy we bring into a Friday night. Well, for the first four minutes we matched the energy of KCC if not brought a little more,” said AMHS head coach Lane Huffman.

“We played defense very well and grabbed a rebound off each KCC miss. However, that kind of simmered out, and we failed to consistently bring that energy back into the game,” Huffman added.

“KCC is a great basketball team. We knew we had to play perfectly if we wanted to stay in the game. They had a good combination of length and speed, we couldn't keep up. While the scoreboard is a little one sided I think we learned a few things tonight. Building and learning from this will be important if we want to turn things around.”