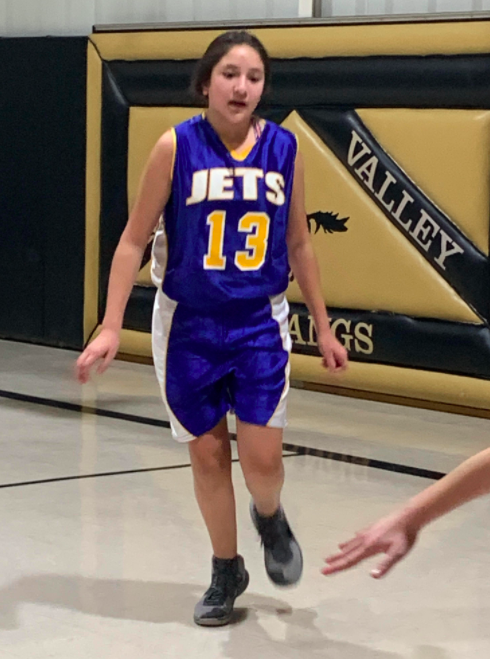 But according to AMMS head coach Craig Null, the score doesn’t tell the entire story.

“This was by far the best the girls have played so far this season,” Null said. “I could not be prouder of the effort they put forth out there tonight. All five girls played their hearts out tonight, and battled from start to finish. The improvement since the start of the season is evident, and that’s all a coach can ask.”

The girls’ game was a single contest, as the AMMS boys were unable field a team to complete the scheduled doubleheader.

Mound Valley led just 3-0 after one period and 9-3 at halftime.

“Our defense was tremendous, and offensively our passing and teamwork were terrific,” Null said. “We had several shots rim out, but we had a difficult time keeping Mound Valley off the boards. They benefited from a lot of offensive rebounds.”          The Lady Mustangs slowly pulled away in the second half, leading 16-7 after three periods before posting the final score of 25-9. MVMS enjoyed a huge 35-13 advantage in rebounds.

“We were outsized. The girls fought hard for the ball, but we didn’t block out,” Null said. “Defensively we did a great job, but Mound Valley got a lot of extra opportunities.”

“All five girls deserve mention,” Null said. “Chantal, Sondra, Peyton, Eryn (Tiger) and Harmony (McFarland) all played hard despite playing the entire game without a rest, and all five moved the ball really well on offense. I hope they’re proud of themselves, because I’m proud of them.”