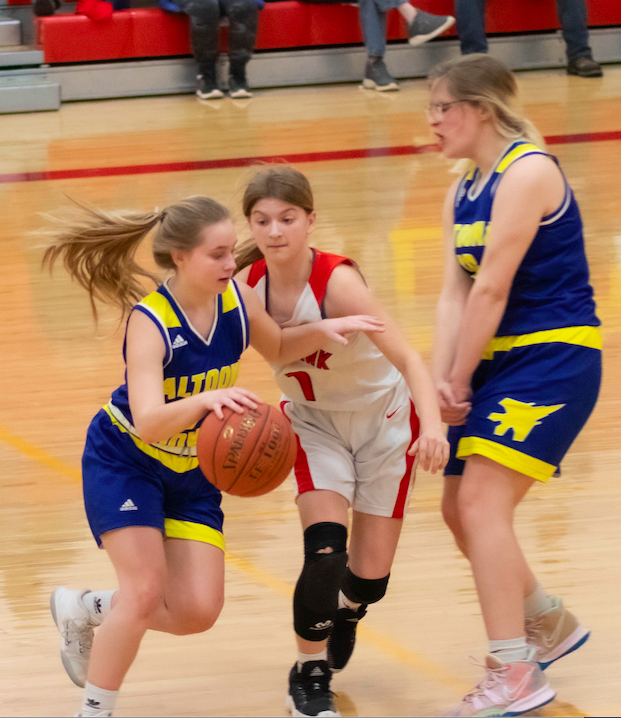 MOUND CITY – While both teams had their moments, neither the boys’ or girls’ squads from Altoona-Midway High School could put together a complete game here Friday night.

As a result, both AMHS teams went down to defeat in a Three Rivers League doubleheader against host Jayhawk-Linn High School.

Jayhawk-Linn won the boys’ contest 56-47, and the Lady Jayhawks also prevailed 45-36 in the earlier matchup.

Both Altoona-Midway units will close out regular-season play on Tuesday with make-up action at Arma against Northeast, prior to heading into Class 1A-Division II regional play later in the week.

The AMHS boys (5-14 overall, 3-6 in Three Rivers League) played a great first quarter, racing to an 18-12 lead, but failed to keep that momentum going. The Jayhawks (8-9) rebounded to take a 27-26 advantage into halftime, then increased the margin to 42-34 entering the final eight minutes, finishing with a 56-47 win.

“We played our best first quarter of the season. We came out with a great amount of focus. We stressed it in the pregame, and had a solid game plan to attack their defense. Everybody was making plays for each other and executing with patience,” said Jets head coach Lane Huffman.

“But our patience disappeared early in the second quarter and that allowed Jayhawk to gain the lead. From that point on, they very much controlled the game.

We failed to box out and take care of the ball. Big credit to Jayhawk-Linn’s effort. They rolled with the punches and controlled a majority of the game.

“Gus Grote was everywhere tonight for Jayhawk,” Huffman added. “He rebounded, stole the ball, and scored all night.”

The Jets were led by Jackson Ashmore, who scored 21 points on the night. Two other Jets reached double figures, as Andy Tiger tallied 11 and William Stackhouse added 10. Jacob Meigs and Dalton Smith rounded out the AMHS scoring with four and three points, respectively.

“As always, we want to stress focus and execution moving forward,” Huffman said. “We are getting close to the win or go home stage of our season. Our guys aren’t ready for the season to be over, so I know we’re going to start doing the little things with more urgency.”

The AMHS boys’ junior varsity recorded a 28-18 two-quarter victory, their third win in a row. The Jets’ jayvee is now 6-3 on the year.

“The first half we didn’t come out to play. We had no energy,” noted AMHS head coach Randy Almond. “We couldn’t get shots to fall in the first quarter, and then we stopped shooting in the second quarter.

“We showed up after halftime and we started getting shots to fall. But after that super slow start, we needed one more quarter,” Almond said.

Sophomore Summer Raymond led the Lady Jets in scoring with a dozen, while freshman Emmalynn Pupanek also reached double digits with 11 points, including a 5-for-7 performance from the free throw line.

“Emmalynn was a bright spot for us,” Almond said. “She’s really coming on as a freshman.”

Brownback led all scorers, pouring in 18 points for the Lady Jayhawks.

“We are much better than we played tonight,” Almond said. “We just need to fix a few things and play a full four quarters.”

Brackets have been announced for the upcoming Class 1A, Division II regionals later this week.

The Altoona-Midway boys have earned the fourth seed and will get to host a first-round regional playoff game. The Jets will host Hartford (4-15) at 7 p.m. Thursday, Feb. 24, at Milo Peterson Gymnasium.

The winner of that contest will advance to sub-state action to face top-seeded Lebo (12-6) the following Thursday at Lebo.

Meanwhile, the Lady Jets are seeded sixth in the regional and will face third-seeded Waverly (11-9) Friday, Feb. 25, at Waverly.