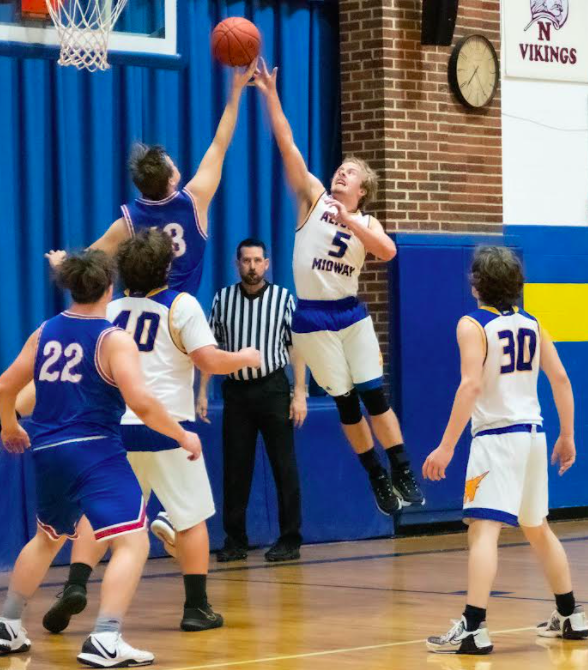 AMHS Basketball comes to a close

When it comes to the playoffs in Kansas prep basketball, it’s win or go home.

Unfortunately for both Altoona-Midway High School basketball teams, it was the later. Both the Jets and Lady Jets were eliminated after dropping first-round games in the Class 1A-Division II regionals.

For the AMHS boys, the end came after earning a home game in the playoffs, as they were defeated 64-47 by Hartford Thursday at Milo Peterson Gymnasium.

One night later, the Lady Jets saw their season come to an end, falling 61-32

on the road at Waverly.

Altoona-Midway earned the fourth-seed and a first-round home game in regional play, but it was all for naught as Hartford pulled off the upset in convincing fashion, 64-47.

“We did not match the energy Hartford brought Thursday night,” said AMHS head coach Lane Huffman. “From the opening tip, we were playing catch up, and Hartford kept the pressure on us all night.”

The Jaguars scored the first seven points of the game and never trailed. The Jets started the second quarter with a seven-point run of their own to get within 12-11, but Hartford rattled off eight unanswered points to regain control.

“We had a great run in the second quarter to get us within a point, but they stretched the lead out again, and we never found a rhythm to get back into the game,” Huffman said.

“While we were not planning on ending our season this early, we spent post game reminding each other of the good we accomplished this season,” Huffman added. “Our players give everything on the court, in the classroom, and as well in the community. The elementary students are always excited to see these guys in the hallway.”

“Our three seniors: Jackson Ashmore, Dalton Smith, and Zeek Roby, won 24 games in their varsity careers. They are the winningest class we've had in a long time,” Huffman said. “They have always led by example, and laid a solid foundation for years to come.

“Jackson has started almost every game since his freshman year. Each year he took on a leadership role and excelled. He has helped his teammates improve, and is the standard of what we want in our student athletes.

“Dalton is a great kid that bounced back from a tough junior year. He became a scorer, a leader, and a positive teammate this year. He stepped up this year and did everything he could to make us a better team.

“Zeek persevered from a knee injury that happened late last season,” Huffman continued. “While he missed a majority of this year, he was cleared late in the season. Despite not being able to play, Zeek still showed up to games and practices, he rolled with the punches and made the most of his opportunity when he was able to get back on the court.”

“Our wins and losses weren't what we wanted, but every member of the team improved, and I never questioned their effort,” Huffman continued. “The future is bright for us, as we will return seven players next year. Our players know that many times, games are won by how much work you put into the off season, and we plan on working hard to prepare for next year.”

Despite the 61-32 loss to Waverly, it was definitely a successful season for the Lady Jets, who posted three victories this season, thus snapping a 116-game overall losing streak (dating back to 2015); a 188-game regular-season losing streak (since 2011); and a 93-game league losing streak (2011).

“Tonight was not the result we wanted, but I told the girls not to focus on tonight’s loss, but instead look at the season as a whole and to focus on all of our accomplishments,” said Lady Jets head coach Randy Almond.

“This is a great bunch of girls, and I wouldn’t trade them for anything,” he added. “Altoona-Midway girls’ basketball has come a long way in the last two years.”

Waverly (12-9), third-seeded in the Lebo sub-state, opened up a 15-3 lead after one period of play, and held a 29-12 advantage at halftime. The Lady Bulldogs increased their lead to 52-23 entering the final period.

Chloe Meehan led Waverly, pouring in 21 points. She hit four three-pointers and was 7-for-7 from the line.

“Waverly has a good club and they really hurt us from behind the arc (Waverly made nine treys),” Almond noted. “But for the second game in a row, we had all six girls contribute on the scoreboard. We had two of our six battling illness, but as they have all season long, everyone showed a lot of heart.”

“Mariah is our only senior. She’s a great leader and will definitely be missed,” Almond said. “But I also want to thank every one of my players for their ‘never give up’ attitude; Coach Lea (Chickadonz) who is the glue who holds things together, and our loyal fans who support us so well.”