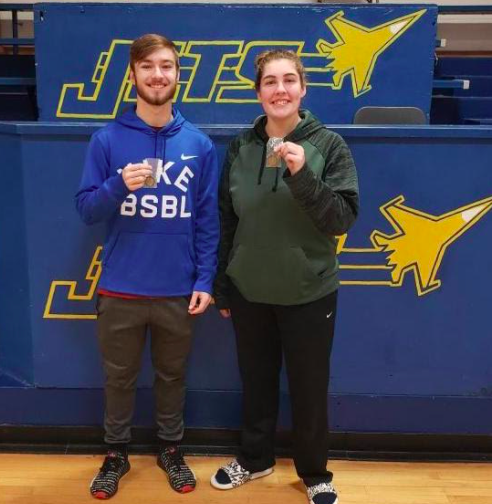 BUFFALO – The Altoona-Midway High School boys’ and girls’ basketball teams each had a senior leader tabbed for recognition when the 2022 All-Three Rivers League basketball teams were announced earlier this week.

AMHS senior Jackson Ashmore was a first-team selection for All-TRL honors, while Lady Jet senior Mariah Stackhouse was chosen for the second squad of the girl’s all-league honorees.

Both Ashmore and Stackhouse were starters for basically their entire four-year careers at AMHS.

Ashmore averaged 16.2 points per game during his senior campaign for the Jets (6-15), but his value showed up in many areas other than scoring, according to AMHS head coach Lane Huffman.

“This season we had Jackson play many positions outside of point guard, and being the true leader that he is, he put his head down and went to work to help the team however he could,” Huffman noted.

In addition to leading the team in scoring, Ashmore dished out 3.1 assists per game, while averaging 2.6 rebounds and 2.7 steals per game.

“Jackson has started nearly every game for us for the last four years. This is a well-deserved honor that Jackson has worked hard to earn,” Huffman added. “He had a great career for the Jets and he will be greatly missed moving forward.”

Stackhouse’s career closely paralleled that of her senior classmate, as she also was a four-year starter for the Lady Jets.

Despite being the focus of the opponent’s defense much of the season, Stackhouse eclipsed the 20-point scoring mark five times, including a career-high 28-point barrage against Southeast-Cherokee.

“Mariah played all four years for the Lady Jets and left it all on the court every time out,” said AMHS girls’ head coach Randy Almond. “Her leadership on and off the court was a major contributor to our streak-breaking season.”

Stackhouse finished the year with a 14.5 scoring average to pace the Lady Jets, while also compiling 96 rebounds, 36 assists, and 28 steals.

“Mariah definitely deserves all-league recognition,” Almond added. “She will be greatly missed … not just for her statistical achievements, but even more so for her work ethic, heart and determination.”

Easton Renn of Southeast and Sean Hurst of Yates Center were unanimous selections to the all-TRL boys’ squad. Earning unanimous recognition on the girls’ side were senior Danielle Howard of Uniontown; junior Liberty Sigmon of Northeast; and sophomore Janae Granere of Marmaton Valley.

Here is the complete list of the 2021-22 all-Three Rivers League selections: