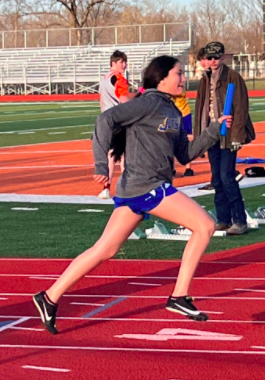 The AMMS thinclads picked up some points in various events, but more importantly, gained some valuable experience competing against other schools.

“I was extremely pleased with how things went at Humboldt,” said AMMS head coach Chary Weilert. “The wind made it seem frigid and miserable, and most of our kids opted to keep their sweats and hoodies on during their events.

“Even with that, we had some good performances,” she added. “I can’t wait to see what these kids do in warm weather and more practices under their belts.”

The seventh-grade girls’ high jump was the best event of the meet for Altoona-Midway, as the Lady Jets claimed second, third and fifth by Harmony McFarland, Ada Hufford, and Peyton Drake, respectively.

On the boys’ side for seventh grade, Chance Mustain picked up points by grabbing fourth in the high jump and sixth in the 800-meter run.

“Chance is a sixth grader but competes against seventh graders,” Weilert noted. “He is small in stature but has a lot of spring in his legs. Along with several others, our younger athletes are getting an opportunity to try out different events, which is really what middle school track is all about – learning and improving.”

AMMS was able to place one individual in each side of the eighth-grade competition. Eryn Tiger placed sixth in the discus for the girls, while Braxton Wittlake took fourth place in the boys’ shot put.

In the team standings, Anderson County captured the eighth-grade girls’ title, while Iola Middle School swept the other three divisions.

Next action for the AMMS track squad will be April 5 at the Eureka Invitational.