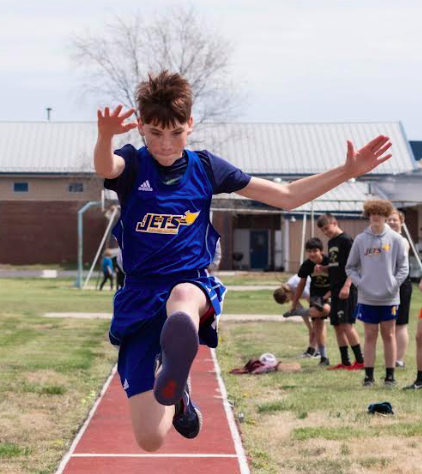 BUFFALO – Actual results in track and field – as the case in many sports – are often difficult to discern by the untrained eye.

Individual improvement is an achievement to be celebrated, although it often does not show up in medal counts or team totals.

Such was the case for the Altoona-Midway Middle School track team when it hosted the AMMS Invitational Monday afternoon here at Frank Kennedy Field and Track.

Eighth-grader Braxton Wittlake was the only Jet to place high enough to score team points for AMMS, garnering a third-place finish in the shot put and grabbing sixth place in the discus.

Wittlake’s seven points accounted for all of Altoona-Midway’s team total in the large, 13-team invitational.

AMMS head coach Chary Weilert praised Wittlake for his outstanding performance, but also pointed out a bevy of Jet squad members recorded personal bests on the day, even though they did not place.

“Braxton had a great day.  He set personal records in both events (34-4 in the shot and 78-11 in the discus),” said Weilert. “In fact, two of his three throws at the shot put beat his previous personal best.

“This shows me that he is getting more consistent with good, solid throws,” Weilert added. “He shows up at each practice wanting to work on technique, so I wouldn't be surprised if he heaves the shot for another personal best in the following week or two.”

But Weilert also had praise for the rest of the AMMS thinclads. Nine other members of the squad (as well as two relay teams), also established personal records Monday, despite not placing.

“Sometimes it's hard to realize how much the kids are improving when we don't grab many medals by the end of the meet,” Weilert said. “But, really, what's most important to me is that the kids are getting better, and that's what I try to highlight the personal bests' following the meets, especially after the tough meets like Altoona's Invitational.”

In addition to Wittlake, AMMS athletes who improved their time or distances, increasing their personal records in their event were:

Uniontown won the team title on the boys’ side, with Altamont and Cherryvale placing second and third, respectively.

Edna Middle School finished atop the girls’ standings, followed by Cherryvale and Oswego. The next action for the AMMS track team is Tuesday, April 19 at Yates Center.