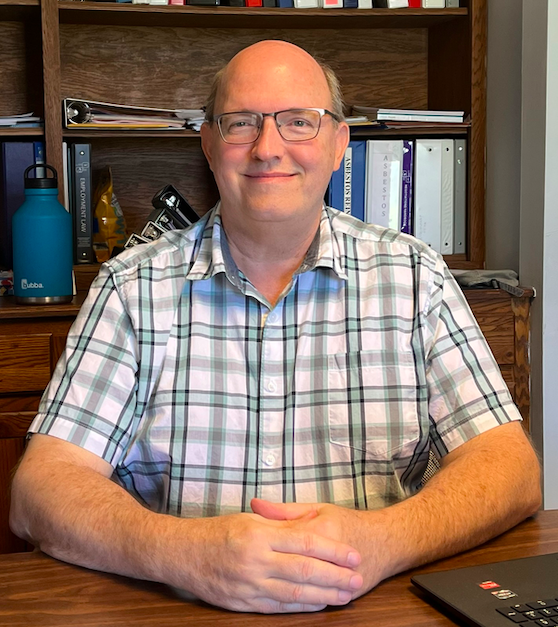 WEST HIRED AS SUPERINTENDENT AT ALTOONA-MIDWAY

When first-year superintendent John West implores the students of the Altoona-Midway School District to study hard because “there’s a great big world out there for you to explore” – they should take heed.

After all, West has seen quite a bit of that world first-hand.

West, a native of Neodesha, was hired this summer by the USD 387 School Board. He succeeds Mike Kastle, who served as interim superintendent last year. Kastle will remain with the district as the construction liaison between the school, architects, and construction manager for the erection of the new elementary school in Altoona.

“I’ve been involved in education for around 25 years, and about 15 years of that I spent overseas at international schools,” said West. “My first job internationally was in Saudi Arabia. From there I went to Mali in West Africa. I later returned to another part of Saudi Arabia, and eventually I also went to Lithuania and Turkey.”

West said the best part of traveling and working abroad was “meeting new people and experiencing the diverse cultures.

“But what I found most remarkable,” West noted, “is that people are people. Yes, we all come from diverse cultures, but in the end, we have many more similarities than we have differences. We’re really all part of one big culture.”

Asked about the worst part of teaching in foreign countries, West noted “all the potential pitfalls” – especially for his students.

He recalled one location where the school and the entire village was surrounded by a tall fence and at times everyone was warned not to leave the fenced compound.

“In Mali I was in a very remote place, where it was difficult to even get food in,” West recalled. “One time the students returned to the main building and after they shuffled in, I noticed the custodian chopping at something. I asked him what was going on and he told me to bring all the kids back out. I did and he showed them what remained of a beheaded carpet viper. The custodian told the kids if you ever see a snake like this, get away from it. Don’t go anywhere near it. He said one bite and you could die within an hour.

“After the kids returned to class, I asked the custodian where he found the snake. He replied in the grass at the bottom of the first step. Every kid had stepped over it on the way into the building.”

West also told of times when nearby villagers wanted the school community to share its sanitized water supply from their small treatment plant.

“They were told no, because the treatment plant couldn’t handle a higher capacity,” he said. “So they would try to pierce the lines and steal the water anyway. From time to time they would have protests outside the fenced area and burn tires and things outside the gates. But usually after a few days they went away.

“There are too many stories to tell all at once,” West laughed. “I haven’t even mentioned when a camel ate my cell phone … or when another camel I was riding was out of control and I basically had to jump off … or riding down the river in a boat when there were crocodiles all along the banks, and hippos beneath us.”

West didn’t originally have grand plans of traveling internationally – or even becoming a teacher – when he graduated high school.

“I really didn’t have plans for college. I had my diploma and was just going to get a job,” West said. “I went from job to job for several years,” noting he went from Neodesha to Tulsa, to the Washington DC area, to Arkansas, back to Neodesha, and eventually to Branson, Mo.

“While in Neodesha, I had taken classes from ICC (Independence Community College), but I couldn’t see a finish line,” West added. “Then in Branson I was working at Silver Dollar City, supervising the concession workers. Toward the end of summer, one by one these students said they were leaving to return to school.

“As I was reporting these departures to my supervisor, she asked: ‘John, you’re not leaving too, are you?’ And something just clicked at that moment and said, ‘Yes. Yes I am.’ And I left and enrolled in education at KU.”

West went on to obtain a bachelor’s degree from the University of Kansas and would later receive his master’s degree in education from Arkansas State University.

“Right after I graduated high school, two of my teachers in Neodesha had urged me to become a teacher,” he grinned. “It just took me a while for me to take their advice.”

West taught in Kansas City and Garden City, but wanted to be a high school social studies teacher.

“There just weren’t any openings for high school social studies at the time,” he noted, “but I saw where there were those positions open internationally, so I made the decision to go.”

Most of his jobs overseas combined teaching with other duties as a principal or administrator, so he had experience in both capacities when he returned to Kansas three years ago.

“My mother (who still lives in Neodesha) was having some health problems, so I wanted to get back closer,” West noted as the reason for returning to the states. “There was a job in Healy, Kansas (a small community near Scott City). It is the smallest district in the state. I said ‘perfect’ and I took it.”

As for making his way to Altoona-Midway, West said he was attending a KASB workshop for potential superintendents and a friend told him he had already been doing most of the duties of a superintendent while serving as principal at Healy.

“So when the opening came up here, I went ahead and applied,” West said. “They offered me the position, and it was almost like coming home.”

While it will be West’s first job as an actual superintendent, he figures all of his previous experiences will serve him well.

“I love trying different things and experiencing various jobs and locations. I love learning new things. Each situation is unique,” he grinned. “Plus, the people here at Altoona-Midway have been fantastic. They’ve been a big help getting me acclimated. We’re off to a great start.”

As for his educational philosophy, West said: “Ideally, it would be to hire good teachers and get out of the way. And from what I can tell, we have a great staff here.”