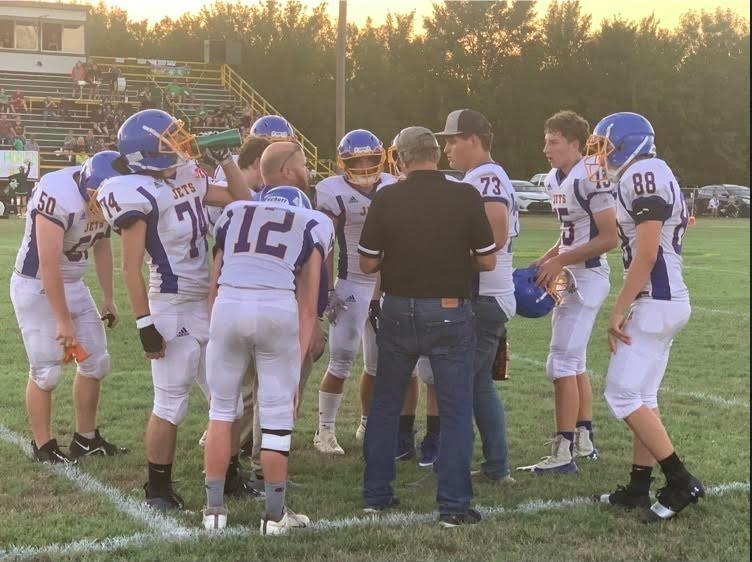 CHETOPA – What a tremendous way to usher in a new era of Altoona-Midway
High School athletics.
The Altoona-Midway Jets, making their official debut into Kansas’ new 6-man
football classification, found their first official foray into that brand of football much to
their liking here Friday night.
The Jets got off on the right side of the ledger with a convincing 46-0 victory over
the Chetopa Hornets in a 6-man, District 1 matchup between a pair of Three Rivers League
opponents.
“What a great way to start the season – and to begin this new venture into 6-man
football,” said AMHS head coach Randy Almond, no stranger to Altoona-Midway sports
but making his debut at the helm of the high school grid program.
“I couldn’t be prouder of this group of young men,” Almond continued. “They have
been working hard to make the transition from 8-man to 6-man. There are new rules to
learn and new formations to get accustomed to, but they’ve been eager to learn.”
Altoona-Midway was fired up and ready to go from the opening kick. The Jets
scored on all seven of their offensive possessions, while defensively recording a shutout
against the Hornets, who were also making their debut in 6-man football.
“We were excited and ready to play,” Almond said. “It was a total team effort.”
The opening drive for AMHS resulted in a 12-yard scoring pass from Jacob Meigs
to William Stackhouse. Brandon Johnson found the endzone on runs of five and 35 yards
to make it 20-0 and the Jets were off to the races.
Meigs and Stackhouse hooked up again on a 37-yard scoring strike, and Johnson
scored his third rushing touchdown of the half with a 17-yard scamper to make it 34-0 at
the half.
In the third period, Harley Lopeman and Kieran Foster tacked on scoring runs of 27
and 22 yards, respectively. The game was called due to the mercy rule in the third quarter
with AMHS leading 46-0.

The Jets also tacked on four extra points during the evening. Foster and Lopeman
each had PAT runs, while the other two came via the airways with passes from Lopeman
to Johnson, and from Meigs to Chase Nalley.
“What a great team effort,” Almond noted. “Our seniors (Nalley, Johnson and
Lopeman) really stepped up. Junior Jacob Meigs had a stellar performance on both sides of
the ball, along with sophomore receivers William Stackhouse and Kieran Foster. Even our
freshman Kage Beck got some good experience tonight. All the kids played great.”
Defensively, Foster, Meigs and Johnson were in on nine, eight, and seven tackles,
respectively. Meigs also came up with two quarterback sacks, two deflected passes and an
interception. Johnson and junior Blaine Collins also recorded a pair of quarterback sacks
each while Nalley added another.
Altoona-Midway and Chetopa are two of more than a dozen schools who are
making the switch from eight-man football to six-man football this season, in conjunction
with the Kansas State High School Activities Association voting to sanction six-man
competition for the first time, beginning in the 2022 fall season. (Another dozen or so
schools, mostly in western Kansas, played six-man football last year even though it was
not yet authorized by KSHSAA.
In addition to the number of players on the field, there are several other rule changes
in six-man football. Among them: Three players must be on the line, but everyone
(including the center) is an eligible receiver on pass plays. Also, the player receiving the
snap from center cannot run the ball past the line of scrimmage until an exchange (lateral
or handoff) has taken place.
First downs are 15 yards instead of 10, and successful extra points earn a team two
points if kicked, and one point on a run or pass.
Altoona-Midway, now 1-0 on the young season, will face a tough challenge next
Friday in its home opener at Frank Kennedy Field. The Jets will host the Waverly
Bulldogs, also 1-0 in 6M-D1 play after a 48-0 thrashing of Southern Coffey County to
begin the year.

School officials are issuing a reminder that the kickoff time for the AMHS-Waverly
contest Sept. 9 has been moved to 2:30 p.m., due to a shortage of game officials available
that evening.