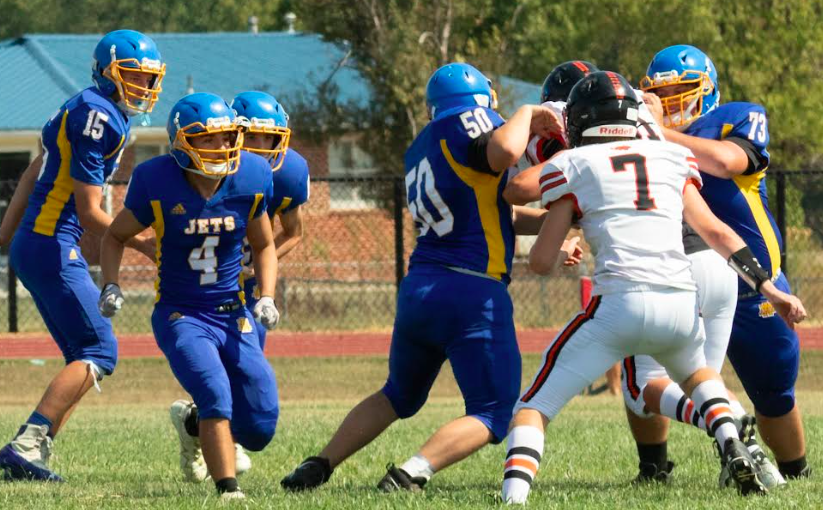 BUFFALO – Even with the unquestionable premium placed on speed in today’s
game, football purists – even at the 6-man level – have to admit that a game’s outcome
more often than not comes down to which team does a better job of blocking and tackling.
The Altoona-Midway High School Jets found that out the hard way here Friday
afternoon, as the Waverly Bulldogs stormed their way to a 51-6 triumph in a 6M-D1
contest played at Frank Kennedy Field.
The contest was played as an “afternoon matinee” as the opening kickoff was
moved up to 2:30 due to a lack of officials available for a night contest.
“We did not do a very good job blocking and tackling today, and Waverly took full
advantage of that fact,” said AMHS head coach Randy Almond. “We will be working to
correct that next week in practice.
“We also have five fumbles which really hurt us. Two of the five were inside the 20
(red zone).
“But, I don’t want to take anything away from Waverly,” Almond added. “They are
a very tough, well-coached team, and they earned the victory.”
Indeed, Waverly has now scored 99 points in two games while allowing just six
total points.
The Jets, who opened the season with an impressive 46-0 win over Chetopa, saw its
record fall to 1-1.
Waverly led 16-0 after the first period and play and increased that advantage to 38-0
by intermission.
Altoona-Midway averted the shutout in the third quarter when Brandon Johnson
hooked up with Jacob Meigs for a 10-yard pass play for a touchdown.
Johnson was 7-of-10 in the air for 87 yards, while Meigs added 25 yards on 2-of-3
attempts. William Stackhouse hauled in three passes for 51 yards, Andy Tiger had three

receptions for 26 yards, Meigs had two catches for 18 yards and the lone score, and Chase
Nalley picked up one catch for 15 yards.
The Jets couldn’t get much going on the ground, as Meigs was the leading rusher
with just 18 yards.
Johnson was also the leader defensively with six unassisted and three assisted
tackles, while Meigs and Blaine Collins each were in on eight total tackles. Stackhouse
was credited with six tackles and a pass deflection.
“We have a lot of work on before traveling to Lost Springs-Centre for next week’s
game, but I was very impressed with the boys in the post-game meeting,” Almond said.
“They asked if we could go back to two-a-day practices. They know we have work to do,
and they are willing to meet the challenge.”