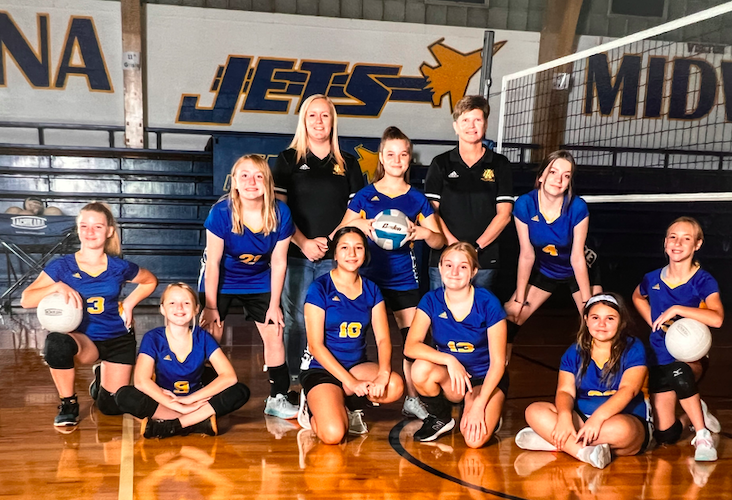 LONGTON – The young Altoona-Midway Middle School volleyball squad picked
up its first victory of the season here Monday afternoon, splitting a pair of matches in a
triangular held at Elk Valley Middle School.
Altoona-Midway lost its opener on Monday, falling to Altamont Middle School 7-
25, 16-25. But the Lady Jets regrouped and came out victorious in the evening’s nightcap,
taking the measure of host Elk Valley 25-17, 25-11.
“I am very proud of this group. They played well and got their first taste of victory,”
said AMMS head coach Nikki Almond. “I tell the girls before each match that I can only
ask for three things: (1) give 100 percent effort; (2) have fun; and (3) stay positive and lift
each other up.
“Well, we did all three of those things tonight.”
The Lady Jets, now 1-2 overall on the season, are scheduled to travel to Tyro
Christian School on Thursday, Sept. 15, for a dual match.
AMMS vs. Altamont
Sandra Morales had two kills, a dig and a tip while Hadlee Pupanek recorded a kill,
a dig and two tips in the loss to Altamont. Harmony McFarland fired an ace, Bella Douglas
had two digs and Bella Davis notched a kill in the losing cause.
“The girls may have lost this match against Altamont, but I am beyond proud of the
way they played,” Almond said. “Their confidence was much better than in the opener last
week. One of my favorite things about this group so far is their ability to stay positive and
not get down on themselves.”
AMMS vs. Elk Valley
The Lady Jets won 25-17, 25-11.
“The girls earned this win. They worked hard for it and are learning to take care of
the ball and set it up,” Almond noted. “They’re starting to get aggressive on the court and
do more hitting – and I love it.”

Morales paced the AMMS attack with six aces and two kills, while Pupanek chipped
in with a pair of aces and a pair of tips. Destiny Raymond and Khiana Hicks rounded out
the attack with one ace apiece.