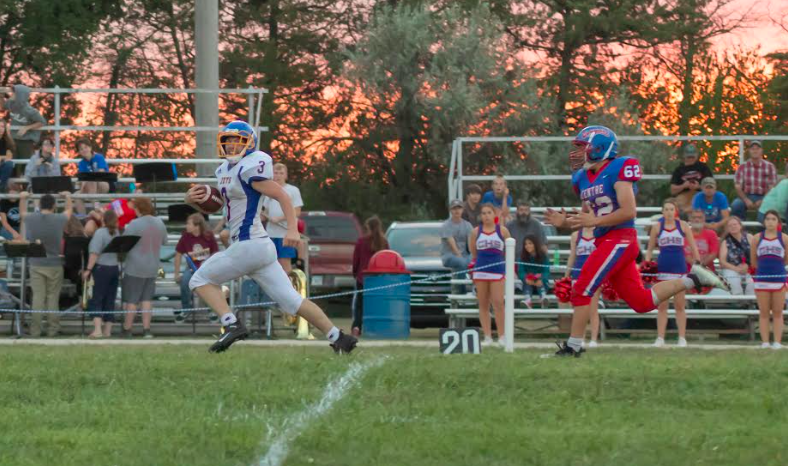 LOST SPRINGS – When your upcoming opponent scored 71 points in their season-opener – and still lost – one might expect that team would play with something to prove over the next few
weeks, if not the remainder of the season.

The Altoona-Midway Jets learned that lesson the hard way here Friday night, as the talented
Centre-Lost Springs High School Cougars scored early and often en route to a 53-6 victory.
The 6-Man, District 1 matchup was called due to the mercy rule late in the third quarter.
Centre, which lost 79-71 to Burrton in an epic season-opener, has bounced back with two mercy-rule victories since then. Altoona-Midway, 46-0 winners over Chetopa in its lid-lifter, has now suffered back-to-back losses and stands 1-2 on the year.

“Centre-Lost Springs is a tough football team,” said Altoona-Midway head coach Randy
Almond. “They were a physical, hard-hitting squad. And two lost fumbles and two interceptions
on our part did not help our cause.

“Still, there were some bright spots. I felt our offense went a little more smoothly, even though
we only had the one score,” Almond noted. “The turnovers hurt, and we still have to do a better
job of blocking. We struggled to get the running game going, and didn’t have much time to pass.
With those things combined, we were hard-pressed to put together a good drive.”
Centre jumped to a 21-0 lead after one period of play, and increased the margin to 34-0 at the
half.

The highlight of the game for the Jets came in the third quarter, when Jacob Meigs connected
with Harley Lopeman on an impressive 61-yard touchdown pass play.
Altoona-Midway did amass 141 yards through the airways, with Meigs completing 7-of-12
attempts. Brandon Johnson was 4-for-7 and Lopeman 1-of-2. Lopeman led the receiving yardage with 76 yards on a pair of catches. Johnson finished with 30 yards receiving, Chase Nalley had 17, Andy Tiger 13 and Kieran Foster had five.

The Jets were held to just 54 yards rushing. Johnson led the ground attack with 34 yards.
Defensively, Meigs was credited with 10 tackles, including seven unassisted, followed by
Johnson with eight total tackles, and Blaine Collins and William Stackhouse with five and four,
respectively.

Meigs, Collins and Stackhouse all garnered quarterback sacks, and Lopeman had an exciting
interception and 25-yard return. Almond also noted freshman Kage Beck played some big
minutes for the Jets and finished with three tackles, two of them unassisted.
With the Cougars being such a physical, hard-hitting team, the injury report was a lengthy one
for the Jets. The AMHS coaching staff indicated Foster suffered a deep thigh bruise, Collins
reported an elbow injury, Lopeman had a strained calf, and Lane Poeverlein was being checked
for a possible concussion.

Despite those issues, Almond remained optimistic.
“We’re going to work on blocking and tackling this week in practice. We’re going to continue to
improve, and hopefully we can even our record next Friday with a win over Chetopa,” Almond
said. Altoona-Midway, 1-2, will host the Chetopa Hornets, 0-3, on Friday, Sept. 23, at Frank Kennedy Field.