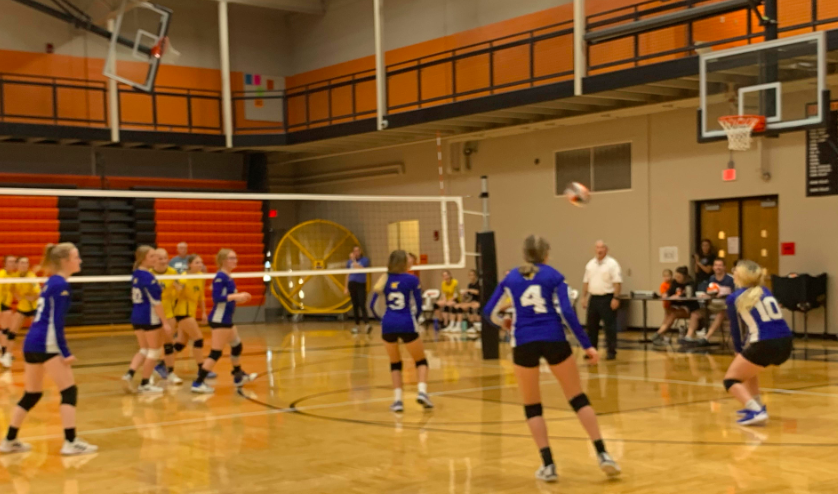 HUMBOLDT – When you only have a roster of 10 players, and only three of those
young ladies are upperclassmen, injuries are not something you want to have to confront
as a high school volleyball team.
Unfortunately for the Altoona-Midway High School Lady Jets, they had to deal with
injuries – and some stiff competition – during Saturday’s Humboldt Tournament.
As a result, the Lady Jets lost all four of their matches on the day. Altoona-Midway
lost its opener to Crest High School 8-25, 14-25; dropped a close match with Central
Heights 18-25, 17-25; fell to Pleasanton 12-25, 9-25; and closed out the day bowing to
Field Kindley of Coffeyville 8-25, 14-25.
“Overall, it was definitely a tough weekend,” said AMHS head coach Amanda
Odell. “We had some positive things happen as a team, but with injuries and just not
communicating well, we came up short.
“We have things that we need to work on, and not a lot of time to do so, as we have
a busy week ahead of us. But I’m confident the girls will keep fighting.”
The Lady Jets, now 2-15 on the season, were scheduled to play in a triangular
Monday at Lyndon, and then return home for a triangular Tuesday at Milo Peterson
Gymnasium, hosting Crest and Oswego.
AMHS vs. Crest
Summer Raymond had four serve points and two tips for the AMHS, while Abby
Relph recorded three blocks and Emmalynn Pupanek registered a tip, a block, a kill and
two service points.
Kyra O’Connor finished with a tip, three serve points and a block, and Autumn
Raymond garnered two tips, a serve point and a kill.
AMHS vs. Central Heights
“We played much better as a team during this match,” Odell said. “The girls
communicated well and set the ball up a lot, but unfortunately came up short (18-25, 17-
25).”

Autumn Raymond led the Lady Jets with six service points while Pupanek,
O’Connor and Sophia Dannels each had four and Summer Raymond and Relph added
three apiece.
Relph also rang up three tips and two blocks; Pupanek notched two tips and a block;
O’Connor added a kill and Summer Raymond had a tip.
AMHS vs. Pleasanton
“We had a couple of injuries toward the end that put us in a bind in this match,”
Odell noted. O’Connor did not return to action the remainder of the day, while Summer
Raymond and Chantal Morales collided at the very end of the second game, but were able
to return for the final match.
Jyl Davis and Summer Raymond paced the AMHS offense with four serve points
apiece, while Relph chipped in three and Autumn Raymond added two. Pupanek finished
with three tips and two kills; O’Connor recorded a pair of tips; and Summer Raymond also
garnered a tip and a block.
AMHS vs. Coffeyville
With O’Connor – the Lady Jets’ only senior – out for this match, Pupanek rang up
two tips, two block and two service points, while Summer Raymond collected four serve
points and a block. Eryn Tiger also recorded four service points, while Autumn Raymond
and Dannels each notched two tips, and Relph had a block.