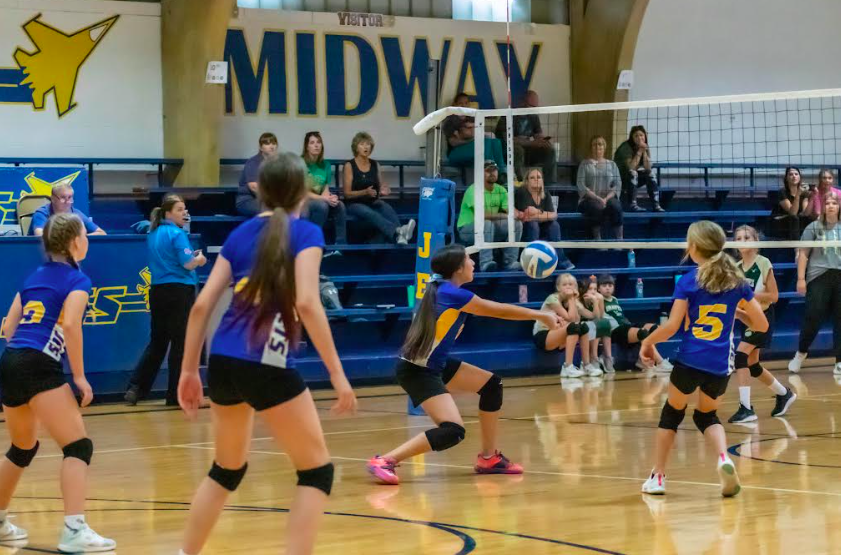 BUFFALO – The final results on the scoreboard may not have shown it, but the
Altoona-Midway Middle School Lady Jets played some very fine volleyball here Monday
afternoon.
The host Lady Jets opened play with a thrilling match against Bartlett Middle
School, coming up just short in a 23-25, 21-25 thriller. AMMS also played well in the
nightcap of the triangular here at Milo Peterson Gymnasium, but dropped a 14-25, 21-25
decision to Mound Valley Middle School.
Altoona-Midway, improving steadily despite a 1-5 overall mark, will stay at home
later this week. The Lady Jets are slated to host another triangular on Thursday, hosting
Tyro Christian School and Liberty Home School Alliance. First serve is scheduled for 5
p.m.
AMMS vs. Bartlett
Bartlett and Altoona-Midway battled toe-to-toe from start to finish in this contest,
with Bartlett finally prevailing 25-23, 25-21.
“The girls played really hard this match and we definitely could have won,” said
AMMS head coach Nikki Almond. “We are learning to make smarter decisions on the
court and take care of the ball.”
Khiana Hicks led the AMMS offense with 11 good serves and an ace, while Sandra
Morales, Destiny Raymond and Hadlee Pupanek all added aces. Pupanek and Morales also
recorded two kills and one tip apiece, while Hicks also had a tip.
“This group of girls surprises me every game,” Almond added. “They showed up
and worked hard.”
AMMS vs. Mound Valley
In Almond’s opinion, the Lady Jets played even better in the nightcap, despite
falling 14-25, 21-25.
“I was really happy with the way the girls handled this match,” she noted. “Mound
Valley was a tougher team, and our girls held their ground. We made better decisions on

the court and talked a lot more. If we would have played like this in the first match, we
would have had it in the bag.”
Sandra Morales led the Lady Jets with three aces and a tip against Mound Valley.
Bella Davis finished with an ace and Hicks recorded a tip.