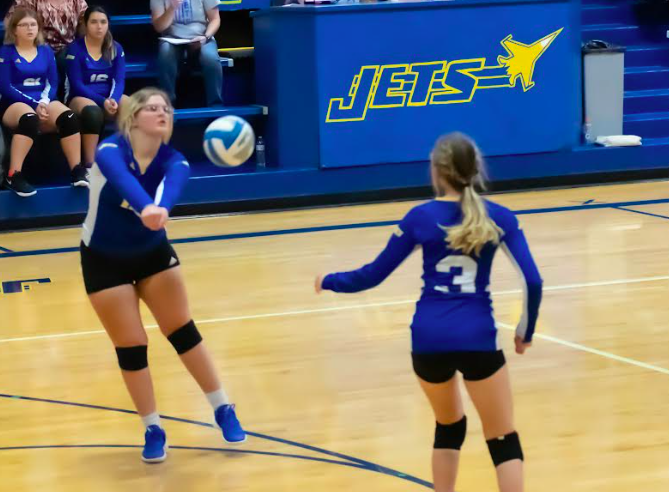 BUFFALO – It’s been a tough week for the Altoona-Midway High School
volleyball team.
Injuries, tough competition, and a schedule that saw the squad play eight matches in
the course of just four days took its toll on the Lady Jets, as they were unable to find the
winning side of the ledger throughout that stretch.
The latest in that string of competition was a home triangular Tuesday at the friendly
confines of Milo Peterson Gymnasium. Unfortunately, Altoona-Midway came up short in
a pair of varsity matches, dropping a 21-25, 17-25 decision to Oswego, and falling to Crest
High School 5-25, 16-25.
One day earlier, AMHS traveled to Melvern for a triangular, and came home with
losses to Lyndon 10-25, 7-25; and to host Marais Des Cygnes Valley 11-25, 22-25.
“Overall, I do feel like we are getting better as a team, if we can just stay playing as
a team through the entire game,” said AMHS head coach Amanda Odell. “We are playing
some really good teams, so that is giving us a lot of learning experiences.”
The Lady Jets now get a much-needed week to practice and heal up. The next action
for AMHS will be a triangular at Southeast-Cherokee on Tuesday, Sept. 27.
AMHS vs. Oswego
The Lady Jets opened play at home on Tuesday falling to Oswego 21-25, 17-25.
“We played very well, communicated well, and played like a team,” Odell said.
“Unfortunately, we came up short. Nevertheless, I was still proud of them for playing
together.”
Abby Relph and Autumn Raymond each had four service points, Summer Raymond
garnered three service points, and Kyra O’Connor and Sophia Dannels added two serve
points apiece.
Emmalynn Pupanek finished with two kills, a block and three serve points, Eryn
Tiger recorded four points off of digs, and Relph also added a block.
AMHS vs. Crest

In the nightcap, the wheels came off for the Lady Jets as they fell to Crest 5-25,
1625.
“I’m not sure what happened to us in that first game against Crest,” Odell said. “We
did not talk, we didn’t move … we just didn’t play like a team.”
Relph led the AMHS attack with three serve points and one block, while Autumn
Raymond, Summer Raymond, Jyl Davis, Pupanek and O’Connor all finished with two
serve points.
Pupanek was also credited with a kill, and Tiger claimed another two points off of
digs.