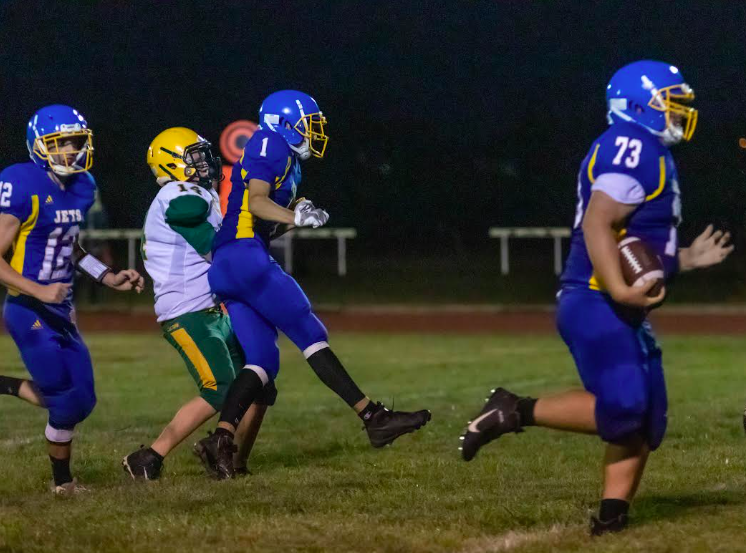 Jets move to 2-2 after defeating Chetopa

BUFFALO – A .500 record for the first season competing in the six-man football division would seem to be an acceptable goal, especially for a school that hasn’t finished with a winning record on the gridiron in more than a decade.

Well, halfway through the 2022 season, its first foray into the nuances of six-man competition, the Altoona-Midway High School Jets find themselves with a 2-2 record.

The Jets evened their season mark with a convincing 49-0 shutout of the Chetopa Hornets in a 6-M, D1 contest played Friday evening here at Frank Kennedy Field.

“The kids were ready to play tonight,” said AMHS head coach Randy Almond. “They came out ready to play and we had things going on both sides of the ball. It was a good victory and I’m happy for the boys. They earned this one.”

Altoona-Midway controlled the contest from start to finish, rolling to a 23-0 lead after the first period. The Jets held a 36-0 advantage at halftime, and the game was called due to the mercy rule after AMHS increased the bulge to 49-0 midway in the third period.

“We still haven’t played a full game,” noted Almond, alluding to the fact that all four Jet contests this year have been called early due to large scoring margins.

It was a total team victory for the Altoona-Midway, as the Jets saw eight different ball-carriers pick up rushing yardage, and five different receivers haul in tosses from two different passers.

By game’s end, seven different Jets had scored points for the victors, along with a two-point safety when Chetopa snapped the ball out of the back of the end zone.

Despite all that, junior Jacob Meigs was the statistical leader for the AMHS offense. Meigs rushed for three TDs and passed for two more, as well as leading the Jets ground game with 65 yards.

Johnson also ran in a pair of extra points, while PATs were also recorded by Foster and freshman Kage Beck on the ground, and Chase Nalley via the air.

Adding to Meigs’ rushing totals were Johnson with 48 yards, Foster with 29, Lopeman with 20, Nalley with 18, Beck and Blaine Collins with 15 each, and William Stackhouse with 14 yards.

“Offensively, the boys looked sharper,” Almond said. “The blocking on the line was much better, as were the pass routes.”

Meigs finished with 96 yards passing while Johnson rang up another 49 yards in the air.

Defensively the Jets were just as good, if not better.

En route to posting their second shutout of the season, Altoona-Midway rang up an incredible 10 quarterback sacks on the night. Collins paced the sack barrage with three sacks, while Johnson, Meigs and Nalley garnered two apiece and Tiger added one.

Collins also recovered a fumble in addition to compiling a team-leading eight tackles. Stackhouse, Lopeman, Johnson and Meigs were all in on five tackles, Nalley and Foster recorded four apiece, and Tiger finished with three.

“Defensively, we came out to play high energy football. We were in their backfield all night long,” Almond noted. “Our tackling was better, which it will need to be as we prepare for next week’s matchup with Wetmore.”

The Cardinals were 2-1 prior to Friday night’s game against Southern Coffey County.